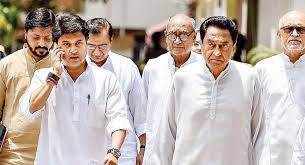 Madhya Pradesh assembly has been adjourned by speaker N.P. Prajapati till March 26th, amid fears of corona virus. In his short address, he advised MLAs to uphold the Constitution.

Earlier in the ongoing battle to protect his government, Kamalnath has written a 6 page letter to Governor. In the letter, CM alleged that many of his MLAs are in the custody of BJP. He added that under such circumstances, floor test doesn’t hold any value. Floor test should be done, only when all MLAs are free. If floor test is conducted in current scenario, it will be completely unconstitutional.

Earlier, Governor Lalji Tandon had ordered the speaker of the Legislative Assembly to conduct the floor test today, after which the CM has written this letter.  In his letter, he explained the article 175(2) of the constitution and the judgement given by the Supreme Court in Arunachal Pradesh case.