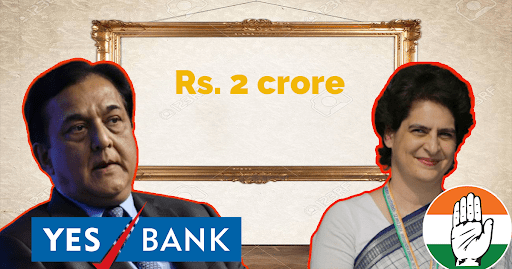 Just a couple of days ago, one more banking giant in India, Yes Bank, collapsed with a cap on transaction being placed as  Rs. 50,000 and had met the similar fate as that of a cooperative bank of Maharashtra – PMC bank.

Since the time, Yes bank has collapsed, the stories and the blame game has emerged in the media reports. While Congress has cornered the BJP rule for the collapse, BJP reverted back claiming a painting to be responsible for the collapse of the fourth largest bank. It has been said in some media reports that the owner of the bank, Rana Kapoor bought a painting from Priyanka Gandhi at a cost of Rs. 2 crore.

The truth of the painting

The painting of former Indian PM Rajiv Gandhi was originally made by MF Hussain which was later inherited by Ms. Priyanka Gandhi. The Painting was brought in the auction by founder of Yes Bank Mr Rana Kapoor. It was sold legally in an auction as per legal norms; Taxes were paid & as being a legal transaction; sale of this painting in mentioned and very well reflected in Income Tax returns.

Thus it looks very much clear, that all the media and social media exercise is being done as a diversion tactic to divert the attention from the recent Yes bank crisis to hitting back to Congress.