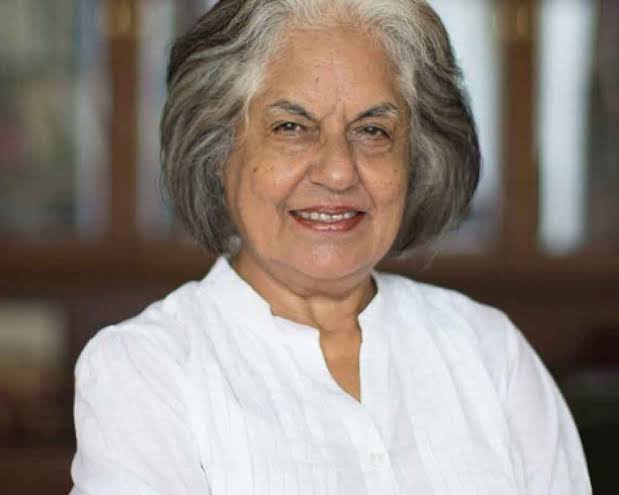 Monday to Thursday, she’s busy in court. On Saturday and Sunday, she’ll be in Chennai, delivering a seminar about women’s rights. There’s a small window on Friday morning, the 76-year-old Indira Jaising tells me. I snap it up.

When I get to her office, she is poring over a draft report that her NGO, the Lawyers Collective, is about to publish about female genital mutilation. “Tell Masuma that in my opinion, there are no voices of women in that report, and she needs to bring them on board,” she tells one of her junior colleagues. From the very beginning of her 52-year career this is what Jaising has fought for – the victim’s voice.

Over half a century, Jaising has forced systemic changes in India’s slow, trundling legal system, and provided legal representation to the poorest in the country. She has been a powerful insider, becoming the country’s first female additional solicitor general in 2005, the third highest ranking government lawyer in the country, and regularly advising politicians. She drafted India’s first domestic violence act, allowing thousands of women to bring civil and criminal suits against attackers for the first time ever.

But more often, she is the outsider, hurling down embarrassing challenges to the government and the establishment, leading commissions in Punjab to investigate the extra judicial killings, police brutality and disappearances in northern India in the 1970s and 80s, or taking up the cause of the Muslim victims of the 2002 riots in Gujarat, a case that has grave implications for the current Indian prime minister, Narendra Modi, who has been accused of bearing some responsibility for the violence that resulted in over a thousand deaths.

She has fought some of the most high-profile legal cases of the last half century, such as the case for compensation for the 1984 Bhopal gas tragedy, considered one of the world’s worst industrial disasters. And her NGO has provided advice and legal counsel for many of the poorest, most dispossessed people in India. On the wall behind her desk is a framed photograph of herself taken by Raghu Rai, a famous Indian photojournalist. “I don’t know how he got me to laugh in this picture,” she says, looking up at it and smiling. “I never laugh.”

Jaising was born six years before partition, a period of mass tragedy and bloodshed after the British finally withdrew and a border was created between India and Pakistan. Her own parents had already relocated to India, but much of her family were forced to migrate as refugees from Sindh in modern-day Pakistan, and scattered around India.

Born in Bombay, now Mumbai, Jaising always had a strained relationship with her mother. Looking back, she believes her mother was pressured to marry and have children. This created resentment between them, but also gave her a deep personal sense of what being trapped felt like. “I think [my sense of morality] comes from memories of being a woman and what it means in Indian society, seeing my mother going through the ignominy of being married without consent, and having to live in a joint family with no autonomy.”

In her 20s, her parents started groom hunting. But Jaising refused to hear about it. “I said ‘what are you talking about? I’m not interested in this alliance.’ I turned off. I thought, this is not my life, I don’t want it,” she says. She had already begun dreaming of a career in law while sitting on her uncle’s balcony, overlooking a law college. Her parents, unlike many Indian families, expressed their reservations but did not restrict her.

She turned out to have an exceptional natural talent for law. Despite poor attendance, she breezed through her examinations and got a prestigious job at a commercial firm called Mulla & Mulla in Mumbai. “I have always considered the fact that I didn’t have anyone in the legal profession a big advantage. I had no role models to emulate and I could fashion my own way.”

Breaking into the law, one of India’s most elite-driven and nepotistic industries, was no small feat. As a young woman in newly independent India, though highly educated, every freedom had to be fought for. When she announced that she would be going to London to do a year-long fellowship at the Institute of International Legal Studies, her parents were deeply unhappy. “In my community a girl only leaves home after marriage,” she explains. But despite their worries, her parents did not refuse.

And in 1970s London, surrounded by a society caught up in protests and strikes, Jaising caught a fever for activism that has stayed with her throughout her life. “We were on the streets all the time. It was a fun thing to do, you could abandon other commitments and be free. But the impact never left me.” For her generation in India, children of the freedom fighters and martyrs that had won India’s independence, living in a free country was never thought of as a luxury. “We were midnight’s children, and this was our inheritance,” she says.

Jaising studied the British legal and social system closely, and was particularly inspired by the council-funded community law centres. There, she felt, “you could dream of equal justice. In India, you can’t even dream of equal justice. Not at all.” It was the final inspiration that would set her on her lifelong mission to provide at least some kind of justice for the poor in India.

By 1975, then aged 35, she had set up an NGO in India, then called the Workers Law Centre, and taken on the case of the railway union workers who were carrying out national anti-government strikes that had created panic and were being brutally crushed by the authorities. Thousands were sent to jail or fired from their jobs. The strike provoked prime minister Indira Gandhi to call a three-year emergency.

The world watched as India succumbed to what felt increasingly like a dictatorship. The suppression of dissent, and the flagrant human rights violations galvanised new anti-government activism, which was already familiar to Jaising. “I knew my contribution would come as a lawyer, to build a legal framework within which democracy could be defended,” she says. “Of course, the emergency was evil, it had to be fought, but we were in our space.” Jaising took on the railway workers’ case for free, which led to the NGO’s offices being raided. In 1984, as tumult began to engulf India,

The Bhopal disaster would become both a national issue and a personal challenge. In 1984 a toxic cloud of gas from a chemical plant, owned by American firm Union Carbide, spread across the city of Bhopal. No one knows exactly how many died, ut the Bhopal Memorial hospital and research centre estimates that more than 10,000 people lost their lives, and 500,000 suffered painful injuries.

Jaising got involved in the proceedings when she heard the government of India planned to take over responsibility of representing the victims. “I thought there’s something very wrong about this. I felt that you can’t disenfranchise the victims, where is their voice?” She felt the government would never get justice for the victims of the tragedy. “The government was complicit. They had a lot to answer, such as why did their regulatory mechanisms fail? What were they doing when laws were being violated all the time?” Jaising won the right for the victims to have their own representation.

But it was a tiny victory against the larger reality; Union Carbide paid a small amount of the requested damages (thousands of the victims say they have still never received a penny of that money) and were then sold on to Dow Chemical. Dow argues that they never owned or operated the plant. This bleak reality of inequality in the justice system, seeing poor, underprivileged people getting a lesser justice than wealthy individuals in the Indian legal system is the most disheartening thing about working as a lawyer, says Jaising. “It’s one of the things that makes me really sad. The one big thing that could make me drop out is this.”

Under Modi’s Hindu nationalist BJP government, there is a palpable rise of sectarianism and anti-leftist vitriol. Jaising has frequently been a target. But she is just not the type to back down from a fight. “Today you’re in a situation where your right to free speech is being challenged, your right to association is being challenged. The core of your being is being challenged. You’re being told whether you’re a patriot or not a patriot, which I will never allow anyone to tell me. Your lifetime of work is being questioned and this is something I think is evil. And you suddenly find yourself in a space where you realise ‘My god, this fight is going to go on’.”