The Gandhis Act Yet Again

The Gandhis Act Yet Again 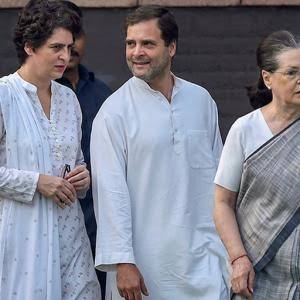 There is a thing about the Gandhi’s, they never back down when the country is in trouble. People might have successively shown faith in PM Modi, who at best has been lackadaisical in dealing with the COVID-19 pandemic but the Gandhi’s are leaving no stone unturned to help the people of this country despite not being in power, and with no immediate political gains.

In statement issued on 22nd March, 73yr old Congress Chief Mrs. Gandhi said, “the government under-utilised our public and private sector capacities” in fighting COVID-19, a disease spread by the highly contagious Novel Coronavirus that has emerged as a serious threat for several nations within a matter of months.
“Testing is the key to prevention. In a nation of 130 crore, only 15,701 samples are reported to have been tested so far. Despite ample time, early warnings and lessons from other nations, we appear to have under-utilised our public and private sector capacities. This must change. We must begin by testing all cases under surveillance and expand to all other symptomatic cases and those coming into contact with the ones testing positive”.

In another effort to battle the pandemic, Congress leader Rahul Gandhi made 50 thermal scanners available to his parliamentary constituency Wayanad. He has also, time and again, tried to warn the PM of the impending crisis that was looming large of the nation. He was one of the leaders who warned the authorities as early as January, to be well prepared and implement timely restrictions, to contain the spread of the virus.

Last but not the least, Mrs Priyanka Gandhi Vadra made fervent appeal to the people to wash hands as prescribed by WHO. She put up several videos educating the masses and demonstrated simple yet effective measures to prevent the spread of the virus. She also appealed to Indian billionaires to help the people of the country in the need. The effect of that heartfelt appeal is undeniable today when a lot of industrialists are stepping up to help in these testing times.

These acts of critical introspection, real time measures, gestures of love, compassion and care towards their countrymen, demonstrates why there is a sizeable chunk of Indian population that loves and adores them. Neither did they desert nor mislead the ‘aam-janta’ when their presence of mind, scientific rigor and guidance is needed the most.