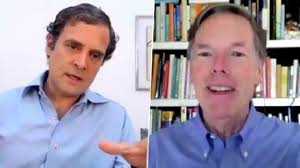 Amid the corona virus epidemic, Congress leader Rahul Gandhi raised the issue of intolerance and China. Rahul interacted with former US ambassador and foreign issues professor Nicholas Burns. He compared the ongoing protests against racism in the US to India’s environment and said that intolerance was increasing in both countries.

To this, the former US ambassador said that India and the US are facing challenges due to authoritarian countries like China and Russia. He said that we do not want a conflict with China, but we are fighting a war of ideas with China.

Burns said that India and the United States can work together not to fight China, but to get them to follow the rules. India and America should work together to promote human freedom, democracy and people’s governance in the world.

It is worth noting that earlier, Congress leader Rahul Gandhi had discussed the situation arising out of Corona with former RBI governor Raghuram Rajan, Nobel laureate Abhijeet Banerjee. At the same time, he has also talked to a professor at Harvard.