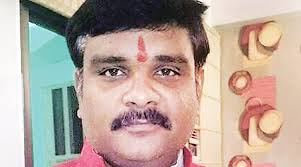 Lucknow| Sadar Tehsildar of Kannauj, Uttar Pradesh has alleged that BJP MP Subrata Pathak entered into my house with his supporters on Tuesday and assaulted him. After the Tehsildar’s allegation, the police has started investigating the matter.

Kannauj Sadar Tehsildar Arvind Kumar says that the list was sent by the MP for distribution of ration, his complaint was that according to the list, the distribution is not happening. On Tuesday afternoon, the MP first spoke on the phone. The MP was informed that ration distribution is being done as per rules. MPs were not satisfied with the reply and started abusing.

The Tehsildar alleges that the MP threatened to come and kill him in the office during the telephonic conversation. The Tehsidar says that the complaint of threat was immediately given to all the top officials of the district. The tehsildar said that after this he went to the house where after some time the MP reached with his supporters. 30-35 people of MP started banging on the door and after hearing this the wife of Tehsildar started crying, when Tehsildar came out, BJP MP from Kannauj and his people beat him fiercely.

When the entire nation is thanking the government workers, who are tirelessly serving the nation during this crucial time, such incidents are bringing shame to the society.