Hunger Has No Religion

Hunger Has No Religion 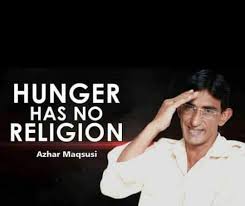 India is not a country which lacks the people who are willing to give something to others as the country is filled with many such examples, who understand the pain of poor and hungry people. Azhar Masquqi from Hyderabad, is one such example of generous souls, who is feeding freshly cooked food to thousands of people, who suffer from starvation and human misery.

Masquqi started the mission eight years ago by supplying small food packets to hungry poors, which eventually grew into a large network feeding more than 1,000 hungry people across Hyderabad every single day. With the tag line ‘Hunger Has No Religion’, he is overcoming every hindrance and social criticism in his six year long journey of making difference in their lives. A plight of a physically-challenged old woman begging and crying for food under a bridge moved his heart and he made up his mind to do something about it. He shared his feelings with his wife and mother and started with 15 food packets and with each passing day, the number of packets increased, despite the shortage of resources. Later, he even hired a cook to prepare food in large quantities.

Now many friends, relatives and volunteers of Azhar have joined him in this humanitarian task of feeding the hungry.

People like Azhar have shown that charity begins at home and hunger is not an issue of giving, but of compassion and care for others.