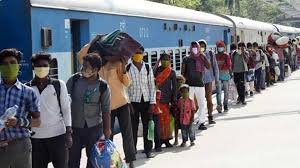 Ten special trains left for about 11,000 migrants from Uttar Pradesh, Jharkhand and Bihar stranded in eight states of the country. These trains were run at the request of Tamil Nadu, Andhra Pradesh, Karnataka, Telangana, Kerala, Rajasthan, Maharashtra and Gujarat. According to the states, these workers will be sent to their districts by buses after medical examination.

Director General of Railway Police Force (RPF) Arun Kumar said, “We have planned to run 20 trains.” On Saturday, 10 trains left for Jharkhand, Uttar Pradesh and Bihar from the five southern states and Maharashtra, Gujarat and Rajasthan. Each train had about 1000 to 1200 passengers. The remaining trains will run on Sunday. Five Shramik Special trains were run on Friday and now they will run daily. In view of the needs of the states, the number of trains will be increased gradually.

The first train ran from Lingampalli in Telangana to Hatia in Jharkhand, which reached Hatia late on Friday. Similarly, a special train from Nashik in Maharashtra to Madhya Pradesh also reached Bhopal on Saturday morning. While the train from Gwalior to Bihar reached Danapur on Saturday afternoon with about 1200 workers. A train departed from Sabarmati in Gujarat for Agra. While a special train will reach Lucknow from Nashik on Sunday morning.

Special train will run on the demand of state administration
new Delhi. As the lockdown progresses to May 17, special trains are being run to transport workers to home states. Zonal Railways will run the train according to the demand of the state, Railways said. For this, the local District Magistrate and DRM (Divisional Railway Manager) are contacting each other. Zonal CPRO will give every information in this regard.