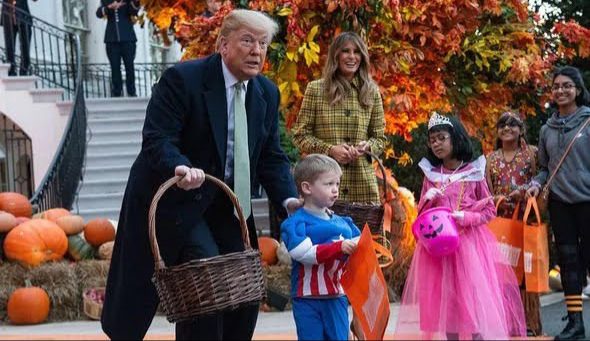 Trump appeared spirited for the festivities, passing out candy and posing for photographs with costumed youngsters, staying outside depositing full-sized Hershey chocolate bars wrapped in White House-logoed wrappers for about 40 minutes.

The theme of the evening appeared to be haunted forest-inspired. Silhouetted cutouts of large, black trees with creepy bare branches were placed on the columns of the White House South Portico, lit a ghoulish orange; dozens of pumpkins lined the curved staircases.

On the South Portico porch, the United States Air Force Strolling Strings played Halloween-themed tunes on shiny black violins — the theme songs from “Ghostbusters,” “Bewitched” and the Harry Potter films were all featured. The walk-out song of the first couple, however, was from “The Addams Family.”

Trump and the first lady, who had for several weeks prior to the evening spent time coming up with the décor details with the White House social secretary, greeted hundreds of children and their parents, many of whom waited for more than an hour in a line that stretched to the east wing side of the White House, winding through the Jacqueline Kennedy Garden.