The Torshaven Bay of blood

The Torshaven Bay of blood 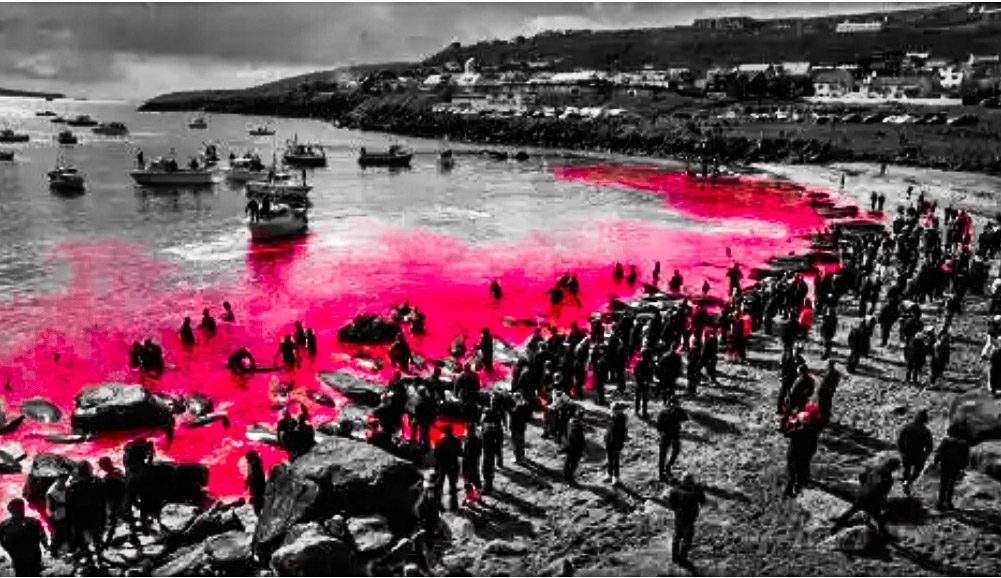 On 29 May, 145 pilot whales and seven white-sided dolphins were killed in Torshavn bay and images of the slaughter triggered outrage on social media. But, according to a Metro UK report, this was not a one-off incident as every summer around 800 pilot whales are massacred in bays across the remote islands “as inhabitants prepare for the harsh winter months ahead.
It comes after horrific images emerged showing a pod of whales and dolphins being rounded up and butchered by villagers.
Ironically, while the massacre may be a dramatic sight for outsiders, whale meat and blubber are valued part of the national diet in the Faroe Islands. In fact, inhuman whaling is a natural part of Faroese life. Each whale provides the communities with several hundred kilos of meat and blubber – meat that otherwise had to be imported from abroad. It has long since been internationally recognised that pilot whale catches in the Faroe Islands are fully sustainable. When whales are sighted close to land, boats enclose behind and begin to herd them to the most suitable bay to be beached and killed. When the animals are close enough, a hook is inserted into the blowhole to haul them further up onto the shore. A fisherman will then use a spinal lance to stab the neck and sever its spinal cord, cutting off the blood supply to the whale’s brain. This method ensures that the whales lose consciousness and die within a few seconds.
However, more than 276,200 people have signed Blue Planet Society’s online petition calling for a ban on hunting dolphins and whales in Japan and the Faroe Islands, as most hunts are unregulated, illegal and unsustainable and kill off 100,000 dolphins and small whales every year. Explosives, knives, machetes and harpoons are reportedly being used to inflict untold suffering in illegal hunts – often for the intelligent sea creatures to end up as nothing more than fish bait.
The concern, however, is not only limited to the small whales and dolphins themselves but also to an emerging human health issue as a result of the consumption of whale and dolphin meat. Evidence points to the accumulation of environmental pollutants (mercury, PCB’s, organochlorines etc.) in the muscle, blubber and organs of small whales and dolphins and not only can this impact upon their ability to reproduce but can carry risks for people who consume them. Health warnings surrounding the consumption of whale and dolphin meat have been expressed by scientists in both Japan and the Faroe Islands where the majority of studies have been undertaken however there are multitude of areas around the world where next to nothing is known about contaminant levels of small whales and dolphins.
It’s time humans at least think about themselves if they can’t pity these innocent mammals.