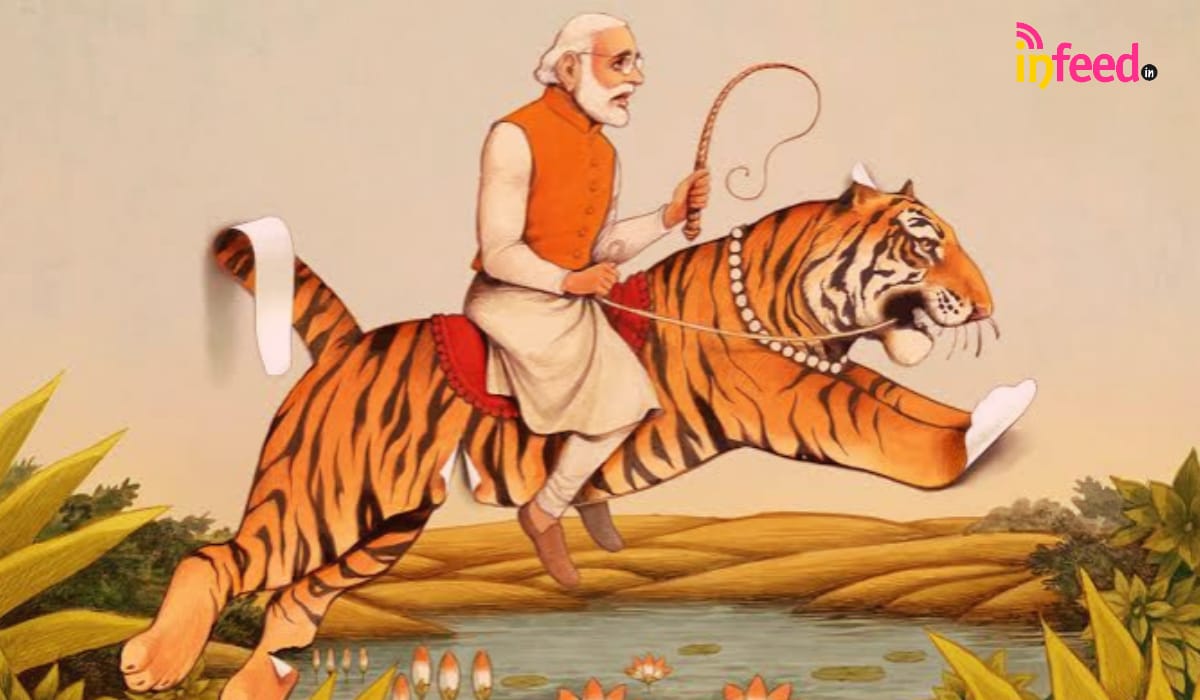 Throughout the world, there are certain politicians with mass sycophantic followers.  These politicians play the role of illusionists.  An illusionist is a person who produces phantoms, creates deep impressions and sharp opinions in masses through their artistic tricks of illusionism.  Illusionism seems to have struck our political world in greater strides over the last few years.  Grays occupy the paradigms of politics more than pure well-marked definitions of black and white truth leaving millions in clouds of confusion, not able to identify deformed falsities from radiant truth.

Our Prime Minister Narendra Modi rose to power from the humble origins of the son of a modest chaiwala capturing Indian hearts in a high popular wave to bring a flourishing India into a golden era of prosperity, green revolution, rural rise, and economic brightening and joy for all.  He was The Man to throw out corruption and understand the pain of the poor and lift them out of troubled waters.  Millions of Hindus, Muslims, Sikhs, Christians, Buddhists, and others voted for Shri Narendra Modi with happy hearts. The poor, urban, rural, middle and affluent rubbed their hands in glee chanting in ecstasy, “Modi hai to mumkin hai!” meaning if Modi is there, then it is possible and chorused “Ache din aane wale hai” meaning good days are going to come.

This image was projected to the masses through social media, vigorous door-to-door invasions, Media, extravagant campaigns and literature.

On social media, PM Modi is not only on the mainstream sites such as Facebook, Twitter, Instagram, and YouTube, but also among many other platforms, he is the most followed political leader on Instagram even though he follows no one.  A thronging BJP IT cell works vigilantly through social media hitting out at a slightest comment against the government attacking people with statements like “anti-national” if they dare to utter an anti-Modi comment. Prime Minister Narendra Modi’s Twitter account is the most popular account across India, with more than 56 million followers.  Over time, it is discovered that 60% of his followers are fake as is also many other world leaders.  Illusionists have to announce to the world that they are wildly popular and somehow that message signals to the world that people are crazy about them.  Thus, others back off, not wanting to challenge such “popular” leaders.

A former spin doctor Lance Price was paid to write book ‘The Modi Effect’.  He later said he had ‘never heard’ of Modi before he started writing the book!  This is the game of the illusionists.  They pay and hire people to mesmerize masses who stop thinking logically.

In rallies, one could hear crowds screaming “Modi, Modi, Modi.”  People were geared to synergize and scream “Modi” to create the crowd glory effect.  Soul power is energized through masses and travels over a nation and even globally.  This is how Modi ji travels on mesmerizing waves garnering thronging popularity.  The Modi government has spent more than 5909 crores on advertisement because they know how important it is.

The illusionist targeted three things in particular to keep the Modi wave on a high ride.

Certain members of the BJP IT cell made forged videos and shared misleading articles on WhatsApp groups and then these were reported by Godi Media.  This built a climate of burning hostility towards Muslims for the divide and rule politics and create an image of Modi ji as a protector of the Hindus from the “Islamic invaders” which was being fed to them.  Such comments are well documented on Social Media.  Fortunately, this was later busted as fake news, but unfortunately, greater damage was inflicted on hearts and minds of millions of Indians.  Because of this unnatural fear towards Muslims, violence towards them was created.  This division demarcated the country and separated communities and since the Hindu community is in the majority, it worked in favor for the BJP in terms of votes too.

The illusionists projected PM Modi as the true Protector of the Hindus – Millions of Hindus were suddenly infiltrated with propaganda news that Muslims wanted to take over India and Christians wanted to covert India. With this newfound fear, attacks on both Muslims and Christians increased.  PM Modi projected as the only one who could save India from these menaces suddenly made a certain large number of Modi Bhakts treat others as if they were infiltrators of India and needed to leave and openly started telling people of other religions to leave.  The plans to rebuild Ram Mandir with war cries to establish India as a Hindu Rashtra grew louder over the last six years.  The illusionists projected the Prime Minister as the only ones who could protect them from Muslims and Christians and there was a constant cry that “Hindu khatre mein hai” meaning if Modi was not in power, there would be endless bloodshed of Hindus, painting a picture of Hindus as victims of the Muslims and Christians, which of course is a fake news ecosystem to create a fear psychosis.

Nationalism rose over India, which is good in its pure form; but if it is not pure, it takes its form in pseudo patriotism.  This is when patriotism makes people violent, intolerant and judgmental. This will never lead a nation to any road of victory. The end of that road is chaos, blame, hatred, and death.  With the Uri attack, Prime Minister Narendra Modi emerged as a hero, during the Pulwama attack, Modi ji rose as a hero to guard the nation, revoking 370 was seen as a masterstroke.  The Media closed their eyes to a very drastic lockdown in Kashmir which deprived thousands of livelihoods, no Internet which affected personal lives, and digital accesses on the Internet which affected business, work, and hospitals, the lockdown deprived proper medical care on time, where people lost lives, and draconian laws with heavy hands which hurt many innocents. In all this if any Indian dared to raise a squeak on Kashmir, they were immediately termed anti-national.

The Godi Media rarely covered the real issues in India such as the economy crash etc.  They focus primarily on every event of the Congress, they ignored the poor management of the corona virus.  In Bengaluru, Ahmadabad etc., people are dying due to lack of ventilators, hospital bills are running into lakhs and while the government had months to prepare, nothing was done. In fact, ministers are making use of every opportunity to loot the people and in all this the Media rarely covers these life-threatening issues, but are fully focused on questioning the Congress on every issue.  The Media is ignoring floods in Assam where hundreds die and millions are displaced. It was embarrassing to find the headlines of New York Times report the 50 that died in Assam floods and millions that were displaced where our Indian media failed to report it.  Where in the world do we hear of the Media questioning the Opposition party and not the government!  The illusionists are on the game!  Most people through the IT cell share material and data that has no roots with unverified sources, but people soak it all up, gullible and wide eyed.  Our news channels feed us with their networking focus to drill their views and thoughts into us.  They selectively leave out large portions of truth because they want to indoctrinate us with their perspectives.

The diabolic illusionists create a factory of people to sing their praises, write on them and make movies on them.  They dictate to the Media what should be said and what needed to be omitted. This is ‘Drishyam’ which is the Sanskrit word for a scene or a visual effect created to form a narrative and story which people follow blindly, unable to discern the phantom from true events.  Today, this is how many politicians thrive.  Let us awake to rise out of the zones of the illusionists and report truth  as in the way of Gandhiji and others who saw the real deal and acted upon it and made our nation great. The phantom will only sink us deeper into the miry clay. Let us rise out of it and make powerful pathways of Truth to transform our nation!