Surviving Defections For a Century

Surviving Defections For a Century 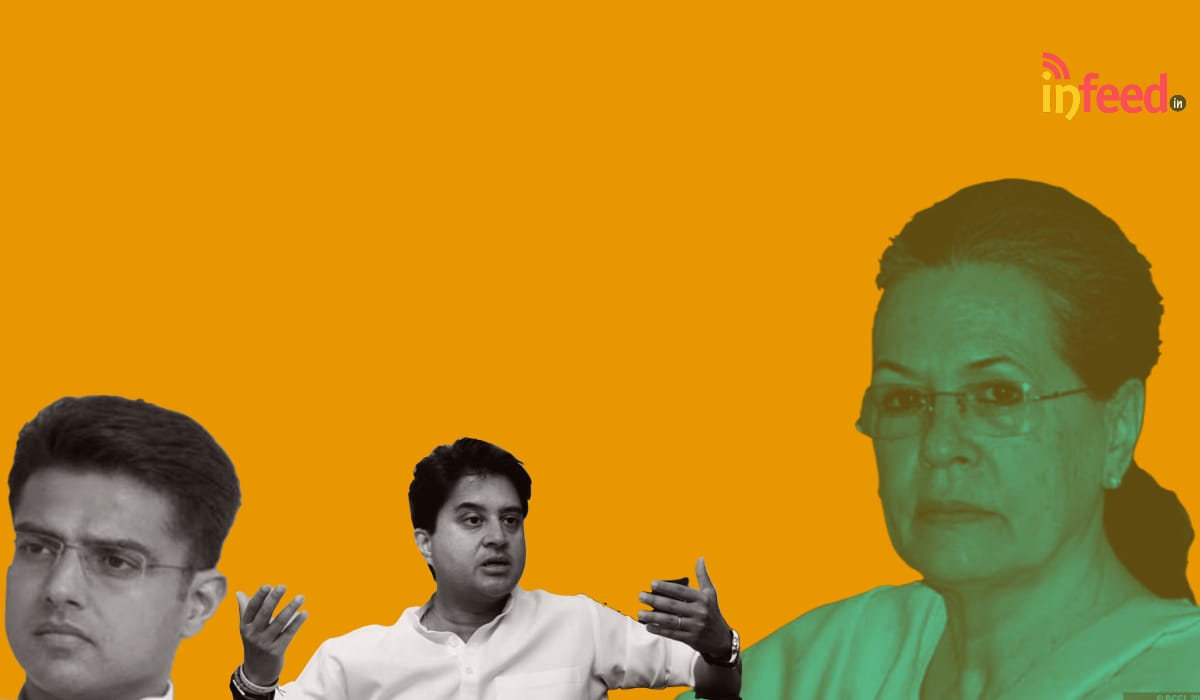 Recently, Jyotiraditya Scindia defected from Congress taking his loyalists with him. This led to the fall of a democratically elected Congress Government in Madhya Pradesh. However, we should remember that this isn’t the first time that Congress has faced such a situation. In its 134 years of existence, there’ve been innumerable defections. If we try listing them one by one, the task will be endless. Let’s focus on the ones which were most impactful and ended up altering the course of Indian politics.

It all started in 1939 with Subhas Bose, more popularly called Netaji. Bose is a man who needs no introduction. He was Gandhi’s closest confidant at a time, so much so that Gandhi recommended him for the position of President. But, he eventually started expressing certain views that were contradictory to Gandhi’s core principles of non-violence. The final nail in the coffin was when Bose proposed an alliance with the Axis powers to orchestrate an armed rebellion across the subcontinent to overthrow the British with brute force. It may not seem like a bad idea at first, but once you start thinking, you realise that the notion of ‘the enemy of my enemy is my friend’ isn’t very feasible if the enemy of my enemy is Adolf Hitler. An emergency meeting was called for the committee members, but this time, Bose wasn’t invited. It was in that meeting that they decided to oust Bose from the presidency. Being deprived of the position this way was a huge embarrassment for Bose. So, he tendered his resignation and defected from the Congress. Thus, he laid the foundation of Forward Bloc. Today, Forward Bloc’s reduced to a minor ally of the Left which itself is reduced to a minor political entity that’s failed to make any impact in the country other than Kerala, Tripura and West Bengal, two among the three bastions ultimately being usurped from it leaving them with just one as of now.

The next big defection was observed in the post-independence era with Shyama Prasad Mukherjee. Mukherjee was India’s first Minister of Commerce and Industry. But, differences of opinion started emerging between him and the Nehru regime. He resigned after the Delhi Pact of 1950 signed between Jawaharlal Nehru and then Pakistani Prime Minister Liaquat Ali Khan which agreed to establish commissions across India and Pakistan to guarantee basic rights to minority. In 1951, he founded Bharatiya Jana Sangh. To ramp up operations on the ground, a self-proclaimed cultural organisation called Rashtriya Swayamsevak Sangh (RSS) lent many of their volunteers to them at the time. The first time they contested elections, they could win just three seats. Their best performance was in 1967 when they won only thirty-five seats out of five hundred and twenty. In 1977, Bharatiya Jana Sangh became Janata Party after merging with Bharatiya Lok Dal, Socialist Party and Congress (O), another defected faction of Congress led by Morarji Desai. Within three years, in 1980, a resolution was passed in an executive committee meeting of Janata Party where it was decided that committee members won’t be allowed dual affiliations by retaining their membership of RSS. This prompted Lal Krishna Advani and Atal Behari Vajpayee to split from Janata Party and form Bharatiya Janata Party (BJP). The first time BJP contested elections was in 1984 where they won only three seats.

Now, let’s talk about Morarji Desai. One of the senior-most Congressmen of his time, Desai was among the major contenders for the position of Prime Minister after the untimely demise of Lal Bahadur Shastri. Albeit, his political aspirations came to a halt as he faced a humiliating defeat against none other than the Iron Lady of India herself, Indira Gandhi. However, in 1977, a coalition by the name of Janata Parivar was formed and a narrow victory was scored, thereby making Desai India’s first non-Congress Prime Minister because at the time, he wasn’t a Congressman, he was the leader of a defected faction called Congress (Organisation) or Congress (O). But, even then, his stint as Prime Minister lasted for merely three years. Poor Desai wasn’t even able to complete a full term before his government collapsed due to sheer mismanagement.

The next was someone who one would’ve least expected it from, Maneka Gandhi, a member of the First Family. There was a time when people used to see Sanjay Gandhi, Indira’s second son as her future successor. But, after his demise, Indira came at a crossroads. On one hand was Sanjay’s wife, Maneka, and on the other hand was Sanjay’s brother, Rajiv. Rajiv was a novice who had no political ambitions whatsoever and was keen on leading a simple life as a pilot away from the political turmoil the family’s been embroiled in since taking charge of the party. Maneka was an outspoken young girl fuelled with dreams of making it big in politics. The problem was that she was incapable of understanding the thin line between outspokenness and arrogance. Throwing tantrums and picking fights were things she was habituated with. This prompted Indira to delay her entrance into politics. But, young Maneka had no intention of waiting. She went ahead and formed her own party, Sanjay Vichar Manch. This was a personal embarrassment for Indira. So, Maneka vacated the family residence of 1, Safdarjung Road in 1982 and hasn’t been on talking terms with the Gandhis since.

In 1983, young Chandrababu Naidu defected from Congress to join TDP under Rama Rao’s influence after getting married to his daughter. In 1984, he organised a coup against his mentor to take over the party himself. The Naidu-led TDP joined UPA and became a Congress ally on two separate occasions, once in 2009 and once in 2019.

Then, the next big name in Congress’s list of defectors is the Big B of Bollywood himself, Amitabh Bachchan. The Bachchans and the Gandhis had shared friendly relations for years. In fact, Amitabh Bachchan and Rajiv Gandhi knew each other since childhood. Their bonhomie peaked in 1984 when Big B took a renaissance from his acting career to dawn the hat of a politician and accompany Rajiv in Parliament. However, everything ended in just three years after he decided to quit when his name surfaced in the list of possible detractors in the infamous Bofors Scam. Many believe his entanglement in the Scam was what made him quit, but in a rare interview, he once admitted that it was for something rather different. When he was campaigning for the Congress in Uttar Pradesh (UP), one of the residents came running towards his helicopter when it was on the verge of taking off just to hand him a folded chit. As per the resident’s request, he unfolded the little piece of paper after the helicopter was in air. It was written “Mr Bachchan, I’m a big fan of yours, but I’m with the other party. Please, leave this state. You’re making life very difficult for me as I’m torn between two desires.”. For some reason best known to him and him alone, those words had a lasting impact on his conscience.

After this, we have someone called Vishwanath Pratap Singh, more famously known as Gen VP Singh. He was the Defense Minister in the Rajiv Gandhi Cabinet who decided to quit citing the Bofors Scam as a reason and then formed Janata Dal to run for Prime Minister. Today, the same Janata Dal remains disintegrated into Janata Dal (Secular) in Karnataka, Janata Dal (United), Rashtriya Janata Dal and Loktantrik Janata Dal in Bihar, Biju Janata Dal in Odisha, Samajwadi Party and Rashtriya Lok Dal in UP and Indian National Lok Dal in Haryana. It’s no more a national alternative to Congress, but rather a band of smaller political outfits scattered across distant parts of India squabbling amongst themselves.

In 1996, Congress stalwart Madhavrao Scindia defected from the Grand Old Party, but only temporarily. In 1998, he was welcomed back with open arms.

Again, in 1998, it was Mamata Banerjee, popularly called Didi. After having differences with the Pradesh Congress Committee, she defected from Congress to form Trinamool. In 2009, she made a comeback, not as a member, but as a Congress ally after being accepted into UPA. It was as a Congress ally that Trinamool was able to win the 2011 West Bengal Assembly Elections bringing an end to an incumbent Left Front regime that had been ruling over Bengal with an iron fist for thirty-five years until then.

In 1999, it was Maratha strongman Sharad Pawar who raised objection against Sonia Gandhi’s claim to Prime Ministership over her foreign origins. An all-out conflict broke out within the party leading Pawar to defect and form the Nationalist Congress Party (NCP). Today, that same NCP which challenged Sonia is an ally of the Congress in UPA under Sonia as its chairperson.

In 2004, Bollywood star Govinda contested elections on a Congress ticket from Mumbai and won with 50000 voters. It took merely three years for him to give up over a ruckus created in the media regarding him being absent from Parliament and being inaccessible to his constituents at all times. In 2008, he quit Congress and never returned to politics again.

The next big episode happened with Jaganmohan Reddy. Jagan is the son of former Chief Minister of Andhra Pradesh, Yedugiri Sandinti Rajasekhara Reddy, more famously known as YSR. After his father’s untimely death in 2009, he was keen on taking up the leadership of the regional faction of the party in Andhra and follow into YSR’s footsteps. However, differences emerged between Jagan and the Congress High Command. Upon not being allowed by the High Command to take over, he defected and founded Yuvajana Sramika Rythu Congress Party (YSRCP).

In 2015, Congress stalwart, Himanta Biswa Sarma of Assam, appealed to the High Command to let him conduct a coup against incumbent Chief Minister Congressman Tarun Gogoi by claiming the support of  fifty-two Members of the Assam Legislative Assembly. After it was seen upon verification that Sarma indeed had the support of fifty-two out of the seventy-eight Congress legislators, the High Command agreed. But, it was Rahul Gandhi’s revolt that forced them to back off. Rahul was the one who chose to directly intervene and block Sarma because Sarma’s name had recently emerged in the list of alleged beneficiaries of the infamous Saradha Scam. Hence, Sarma quit the Congress and joined BJP.

Last, but not the least, it’s none other than one of Rahul’s closest confidants, Madhavrao Scindia’s son, Jyotiraditya Scindia. Scindia Jr was keen on becoming Chief Minister of Madhya Pradesh, but the High Command chose Kamal Nath. So, Scindia joined BJP this year.

Now, we have Sachin Pilot who’s keen on becoming Chief Minister of Rajasthan and replace Congressman Ashok Gehlot. He maintains that he has no intention of leaving Congress, but some discrete footages that have surfaced in the media insinuate otherwise. Even his choice of lawyers for representing him in court against the charge of conspiring to destabilise a democratically elected government through horse-trading is rather suspicious. Probably, young Sachin should understand that patience is a virtue. The vast majority of defectors either ended up becoming permanently marginalised or got compelled to return to the Grand Old Party’s foray like a sheep. In 2014, at the age of thirty-seven, he got to take charge of Congress’s regional faction in Rajasthan. In 2018, he got made Deputy Chief Minister. If he jumps ship at this crucial juncture of his career, then that career might cease to exist.