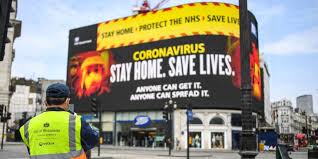 Paris| As many as 66,000 deaths can be seen in Britain due to the deadly COVID-19 virus, which is by far the deadliest in Europe.

The novel virus, which emerged in China, is now centred in wester Europe, under which Spain, Italy and France experienced a huge death toll.

As per the modelling conducted by the Institute for Health Metrics and Evaluation (IHME) at the University of Washington’s School of Medicine showed that approximately 151,680 people were likely to die from the virus across the continent.

The IHME models include the predicted effect of social distancing, and Murray said it was vital that measures aren’t relaxed too suddenly once countries pass their morality peak.

More than 5,000 people have died from COVID-19 in Britain, fewer than in Spain, Italy and France. But, according to the modelling done, considering the individual nation’s intensive care bed capacity, age mortality breakdowns from Italy, China and the US, which suggests that in the first wave of the novel virus by the end of July, 66,000 deaths can happen in Britain alone, surpassing Spain and Italy.

“We are expecting a foreboding few weeks for people in many parts of Europe,” said IHME Director Christopher Murray.