RIP Humanity : Girls Pulling Plow Instead of Bulls in MP

RIP Humanity : Girls Pulling Plow Instead of Bulls in MP 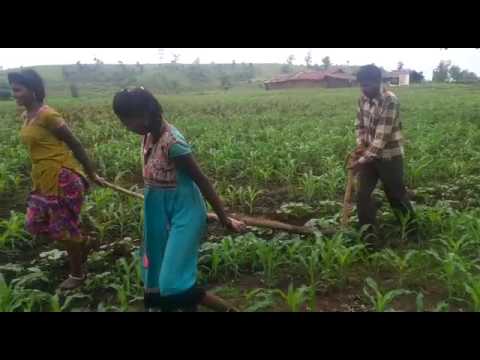 In Agar Malwa district of Madhya Pradesh, such a picture of two daughters and a forced farmer father has come out, which is going to shock the heart. In Mathurakheri village, about 30 km from the district headquarters, two daughters gave up studies to run a house. We are talking about Kumer Singh, the farmer of this village and his daughters Jamna and Madhu.

Kumer Singh has 2 bighas of agricultural land in his village, so the crop grown on this land can only produce two time meals for Kumer Singh’s house and not for the needs of his and his daughters. In such a way, in order to reduce the father’s expenses and help in the work, both the daughters of Kumer Singh gave up studies and started distributing father’s hands in the fields.

Trouble did not end here, after the sowing of crops in the fields to destroy the weeds, when the rulers did not get money to buy the bulls running the door, both the daughters of Kumer Singh became bulls. Seeing this situation of forced farmer, the eyes of villagers also become moist.

Three months ago, because of the typhoon, Kumer Singh’s house collapsed. He did not even have a penny to build a new house. Living in a roofless house with two daughters and wife was difficult.

The elder daughter of Kumer Singh, who is partnering in the fields, is 18 years old and the younger daughter is 16 years old. Jamna says that she wished to study and studied till 8th in the village itself. After that one has to go out for studies, in such a situation, neither was he financially strong for going out and neither did the father want to leave in this condition. In such a situation, it was considered necessary to leave the father and share the hand.

Jamna said that we do not like to get weeds in the door to remove weeds in the field, but we have helplessness. There is no money to buy bulls. If you buy a bull, there is no place to keep them, as well as it is crooked for them to bear the expenses of maintenance of the bull. Jamna’s younger sister is just 16 years old. She too stopped studying to help her father.

Kumer Singh says about his compulsions – Due to financial constraints, daughters were replaced instead of bulls to remove weeds from the fields. We have not been financially assisted by any sarpanch or secretary. The house was also broken which was collected by the villagers and got it built.

The villager Kamal Singh tells about the economic situation of Kumer Singh that – Kumer Singh is very poor 2 bigha walks home with the help of land. Their daughters support them. Officially, no one came forward to help them. The daughters have left their studies to share the father’s hand. His house also collapsed a few days ago, the villagers have cooperated and built his new house.