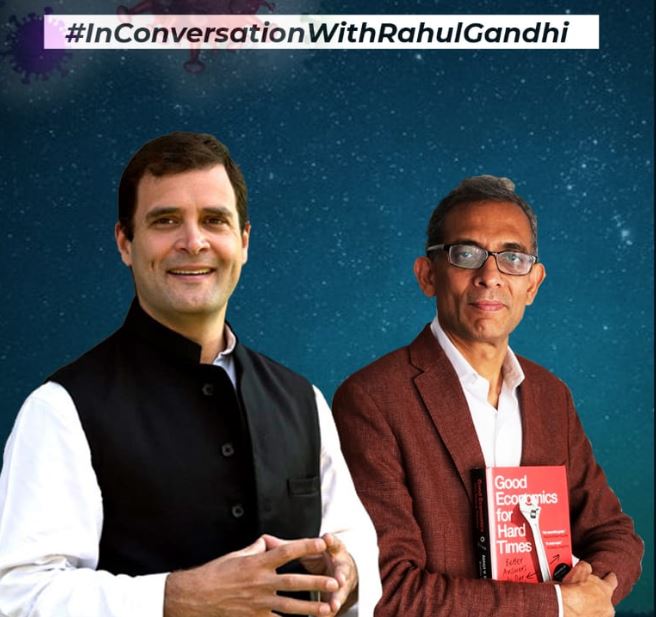 In another conversation on the impact of Covid-19 on Indian Economy, Congress leader Rahul Gandhi joined Nobel Laureate Abhijit Bannerjee to discuss on the factors which can be taken care by the government, and measures to provide some relief to the poor.

Nobel Laureate Abhijit Banerjee stressed on the need for an instant stimulus package by the Government in order to revive the Indian Economy. In conversation with Rahul Gandhi, he raised alarm by saying, “We already had a demand problem and now, there will be a bigger demand problem.”

Starting the conversation, Congress leader asked the Nobel Laureate whether it was a bit surreal that everything was locked up and how Banerjee’s kids were dealing with it, to which he replied “It’s scary,”.

“Were you expecting the Nobel Prize? Was it out of the blue?,” asked Gandhi, congratulating Banerjee on the award. “It was completely out of the blue,” he replied. Gandhi then veered to the impact of the coronavirus on poor people, asking Banerjee how the issue should be considered. “We had a policy framework during UPA to provide a floor for the poor people. Like MGNREGA, Right to Food.” Gandhi expressed consternation that those issues were sidelined now by the Centre. Banerjee replied that those were great policies given by the UPA government, but certainly not enough. “What happens to people who are not covered? What if you are in Mumbai where there is no NREGA and you are not a resident there? You won’t get PDS ration supplements.”

He emphasised on UPA’s vision of linking Aadhar with PDS, so that a linked person can get food in any part of the country, which could have helped migrant workers and laborers, under the present circumstances. He also discussed on a temporary Ration Card (provisional) to be given to those who do not have one.

Rahul Gandhi himself gave a few suggestions saying, “We need to restart demand in the economy faster, because the sooner we do it, the more effective it goes. Every second lost is damaging the economy. MSMEs account for millions of jobs to Indians, but are currently going through a cash-crunch. If not helped soon, they may go bankrupt, pushing millions into poverty.” He also asked about the grainstock which must be distributed in the poor, which can be refilled this season.

“Will the economy revive?”, asked Gandhi. “We have to be more optimistic about it”, said Banerjee. When Gandhi raised the point that lots of people worked in small and medium enterprises, Banerjee stressed on the need for an immediate stimulus package. “We need a stimulus package now. We have not discussed a large enough business package,” said Banerjee. “US announced 10 per cent GDP, while we are still discussing over 1 per cent. Spending is the best way to revive economy.” Infuse the cash into MSME and a Keynesian chain reaction will follow, said Banerjee.

So, is it like a NYAY cash transfer, asked Gandhi, referring to the Direct Benefit Transfer scheme mooted by Congress before the Lok Sabha polls. “I would go beyond the poorest people,” replied Banerjee. He added, “60% of the poorest population must be given some amount in their hand, which when spent will give a great boost to the economy.”

Banerjee ridiculed the strongman theory as it has done no good in case of US and Brazil, and asked to look up to the Indonesian model of transferring funds to the poor, to fight an emergency situation.

The conversation with Banerjee is a part of Gandhi’s series of deliberations with global experts on economy and health. The first such dialogue was held last week when Gandhi discussed the coronavirus pandemic and its economic implications with former Reserve Bank of India governor Raghuram Rajan. The conversation was seen by around 5 crore people across party’s social media platforms.