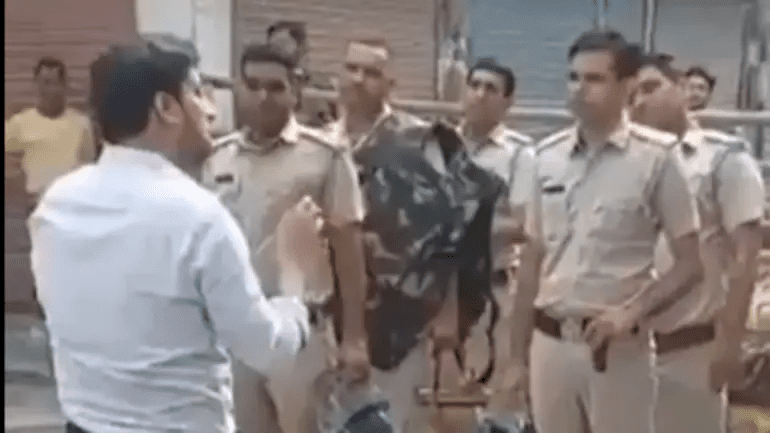 Police brutally assault farmers who were protesting against the BJP meeting, which was organized by the Haryana BJP state unit with regards to the preparation of upcoming Panchayat elections. All the state BJP leaders were expected to attend including Haryana Chief Minister Manohar Lal Khattar, state BJP chief Om Prakash Dhankar, MP’s, MLA, and state BJP leader were to participate.

The farmers had informed that they will block the highway and hold a protest march against BJP. Haryana state government beefed up the security at the private hotel near railway road karnal to stop the protester.

In one of the videos, Karnal’s Sub-Divisional Magistrate can be seen instructing the policemen to crack skulls if farmers cross the barricade. He ordered that “It is very simple and clear, whoever he is, wherever he is from, no one should be allowed to reach there. We will not let this line be breached at any cost. Just pick up your lathi and hit them hard. It’s very clear, there is no need for any instruction, just thrash them hard. If I see a single protester here, I want to see his head smashed, crack their heads,”

As the farmers started to gather on the highway towards Karnal, the highway got blocked and the police took action, around 10 farmers were injured. As the news of brutal assault against farmers spread across Punjab many different unions started joining the protest.
In a second incident farmers from Amritsar were Lathi charged with protesting against Prime Minister Modi’s virtual inauguration of a renovated Jallianwala Bagh memorial.

Bhartiya Kisan Union (Chaduni) chief Gurnam Singh Chaduni alleged that police started to lathi charges without any provocation. Responding to the allegation the police said that mild force was used as protesters were affecting traffic.

Haryana Congress chief Kumari Selja said that “What happened to our farmers in Karnal is a matter of great concern… the congress party condemns this attack in the strongest possible language. What you saw today was evidence of the BJP’s disregard for farmers and their safety….”
She further added that “The Congress has always, and will always, support our farmers, who were never mistreated when we were in power. Now the SDM is telling police to ‘break their heads’ is this democracy?

BJP government is yet to acknowledge farmer’s protests and take proactive measures to sort the issue but BJP has been in the forefront terming the farmer’s protest as anti-national or Khalistan movement.