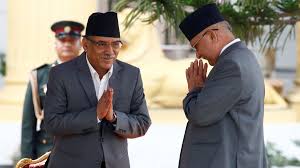 Amid reports of the resignation of Nepalese Prime Minister KP Sharma Oli, he reached the Sheetal Niwas today to meet the President of Nepal, Bidya Devi Bhandari. It is believed that Oli can address the country today. Let us know that his resignation was sought by the senior leadership of Nepal Communist Party. At the same time, today the cabinet took an important decision and decided to postpone the budget session of Parliament.

At the same time, PM Oli did not attend the meeting of the Standing Committee of the Communist Party in Baluwatar. Senior leaders within his party such as Madhav Kumar Nepal, Jhala Nath Khanal, Bamdev Gautam and Narayan Kazi Shrestha have been demanding resignation from the Prime Minister, among others.

On the other hand, the political drama continues in Nepal’s capital Kathmandu. The cabinet meeting has concluded at the official residence of the Prime Minister’s Baluwatar. The Government of Nepal has decided to postpone the ongoing budget session of Parliament. President Bidya Devi gave cabinet approval to the proposal to postpone the parliamentary session and sent a letter to the Parliament Secretariat accepting it.

Among other reasons demanding PM Oli’s resignation, his statement trying to bring down the government on India is being cited as the main reason for the controversy. Senior party leaders are deeply offended by Oli’s statement.

On Wednesday, the Janata Samajwadi Party (JSP), Nepal’s main opposition party, staged a nationwide protest over the citizenship bill. The party says that this bill is against the minorities of the country.