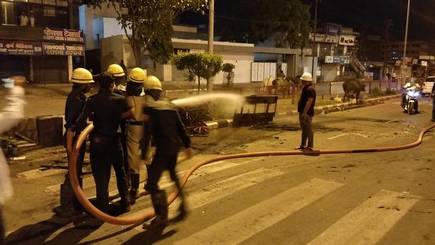 While the entire national media has been trying to blame Tabhlaghi Jamaat for the spread of corona, in the meantime hundreds of migrant labors, upset by the lockdown in Surat, Gujarat, came out on the streets on Friday night. These people were demanding arrangements to send them back to their homes. During their fierce demonstration, the workers also burnt several vehicles. The police disrupted the arson and took control of the situation.

According to the information received, hundreds of migrant laborers took to the streets on Friday night in Laskana area of ​​Surat, upset by the lockdown. They were demanding that proper arrangements should be made to return to their homes and to pay their dues as soon as possible.

An official said that some of these workers, who were protesting, set fire to handcuffs and other vehicles and vandalized them, demanding to be returned to their home state. Police rushed some laborers from the spot to prevent the agitation. Then the situation came under control.

Due to the lockdown many migrant laborers have become unemployed here. In such a situation, they demand that the government should allow them to return home to their villages.

A similar incident took place on 30th March where 93 migrant labors have defied the lockdown and attacked the police where police has to fire tear gas shell to disperse the crowd.

While the media keeps on blaming the Jamaatis for the outbreak of corona in the country, it has tried to distance itself from such issues, which has led to the spread of virus in the country and which are essentially the reasons for it. One of the foremost reason which everyone is talking about the greed for government formation in Madhya Pradesh, due to which the airports were not sealed, parliament was kept running for more time than the necessity, in which one MP, who has attended a party with a corona positive case was also present. Also, during the oath of Shivraj Singh, a large crowd was allowed to gather, completely ignoring the guidelines of social distancing.