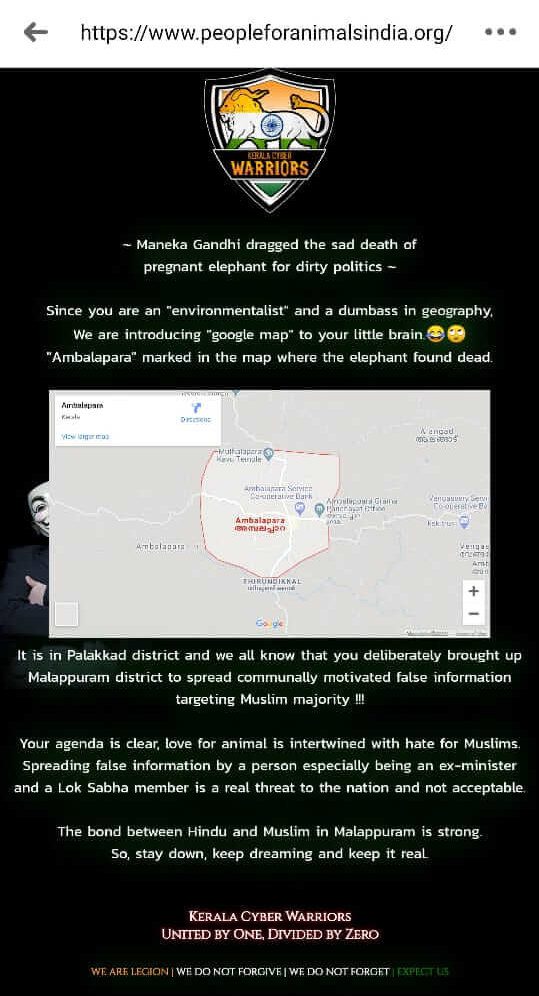 Former Union minister Maneka Gandhi what it seems to have angered at least a few people in Kerala after she called Malappuram the “most violent district in India”. Maneka Gandhi had made the comments following the killing of an elephant, which had eaten a pineapple stuffed with firecrackers.

Counter to her views, the elephant died in adjoining Palakkad district.

A lawyer in Malappuram has also filed a complaint, seeking an FIR against Maneka and others for the comments, alleging the statements were made to add “communal colour”. Kerala’s leader of the opposition, Ramesh Chennithala, too demanded apology from Mrs.Gandhi.

Kerala Cyber Warriors posted a long message on the hacked page, featuring a Google map to show the death of the elephant occurred in Palakkad.

It wrote, “Maneka Gandhi dragged the sad death of pregnant elephant for dirty politics… Since you are an “environmentalist” and a ******* in geography, We are introducing “google map” to your little brain…. Ambalapara marked in the map where the elephant found dead. It is in Palakkad district and we all know that you deliberately brought up Malappuram district to spread communally motivated false information targeting Muslim majority!!! Your agenda is clear, love for animal is intertwined with hate for Muslims. Spreading false information by a person especially being an ex-minister and a Lok Sabha member is a real threat to the nation and not acceptable. The bond between Hindu and Muslim in Malappuram is strong. So, stay down, keep dreaming and keep it real…”

The People for Animals website appeared to have been down at the time of filing this report.

Kerala Cyber Warriors claimed on its Facebook page that it had hacked the website of People for Animals, India.

Last year, Kerala Cyber Warriors hacked the website of the Hindu Mahasabha too after the group celebrated the date of the assassination of Mahatma Gandhi.

Maneka Gandhi was criticised not only for her comments on Malappuram. Speaking about the elephant’s killing, Maneka declared 600 elephants were being killed in Kerala.

The Quint reported on Friday that parliamentary data from the Union government showed around 373 elephant deaths were reported in the period of 2015 to 2019 from across India, with 39 from Kerala.