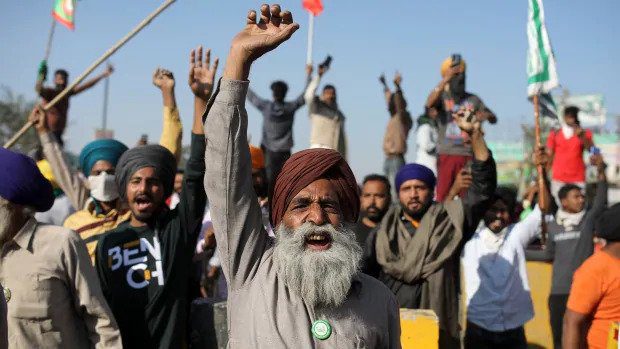 Summary
I The farmers’ movement which has been going on for the last 6 months against the three new agricultural laws seems to have put the hands on the neck of the inevitable horse of capitalism with a firm grip.
II Author

The farmers’ movement which has been going on for the last 6 months against the three new agricultural laws seems to have put the hands on the neck of the inevitable horse of capitalism with a firm grip.

Each system has its own underlying dynamics which propel it forwards and also aid in its preservation and perpetuation. In India, the advancement of neo-liberalist/finance capitalist system through privatization/corporatization, which is being linked to the phenomenon of neo-imperialism, is also no exception. Since 1991, the neo-liberalist/finance capitalist system has been at the heart of the country’s policies in open defiance of the constitutional system, a system which, howsoever good or bad it was, has existed after the independence of India. During the last three decades, most ‘national’ enterprises have been increasingly oriented towards strengthening this very system. Despite the dominance of neo-liberalism/finance capitalist ideology in the initial decades of its introduction, it had a strong opposition too.

Rather, against the threat of neo-imperialist slavery, the need for an idea of alternative politics and, simultaneously, the need for a political organization was also strongly underlined. Along with this, efforts were also made to create an idea of alternative politics and to build a political organization in order to take on the challenge. But the opposition/alternative collapsed as, along with global circumstances/factors, the hidden supporters of neoliberalist/finance capitalist ideology/system formed a unity with its open supporters present in large numbers in the country. This unity of the open and hidden supporters came to the forefront in the ‘Anti-Corruption Movement’ organized under the aegis of India Against Corruption (IAC).

In the absence of a true and sustainable opposition/alternative to this system in mainstream politics and intellectual discourse in the last 15-20 years, the neoliberalist/finance capitalist system has developed its own independent dynamics. As a result, every dice falls in its favour. The handful of political organizations and individuals who are genuinely opposed to this system continue to remain marginalized. The unbridled horse of the capitalist Ashwamedh is galloping, plundering national resources/assets/labour, amalgamating public sector enterprises/institutions in the unabated pursuit of its profits. Constitutional democratic institutions dragging behind this horse are not only losing their strength, their form is also getting distorted. No resistance has been able to put a strong hand on the neck of the unbridled horse of capitalism. This phenomenon is not limited to the economic plight of the majority of the population and the super prosperity of a small section on their cost. In almost all dimensions, our national life is becoming hypocritical, false, mischievous, superstitious and quarrelsome.

It is needless to reiterate that the neoliberalist/finance capitalist system is the inverse of the constitutional sovereignty achieved along with the independence of the country and, now badly maligned, the constitutional socialism. The ruling class is fully aware of this. It incessantly churns out slogans like ‘Shining India’, ‘Sabka Vikas’ ‘Achchhe Din’, ‘New India’, ‘Vishwaguru Bharat’ and stokes ultra-nationalism to cover up the open betrayal of the values of the freedom movement and Constitution. There is a strong group in the country of those who consider themselves different and above from all this. But the authenticity/honesty of this enlightened section has remained doubtful when seen against the reality of the circumstances. It can be said that the present condition/predicament of the country is a result of the dubiousness of this section.

Against this backdrop, the farmers’ movement which has been going on for the last 6 months against the three new agricultural laws seems to have put the hands on the neck of the inevitable horse of capitalism with a firm grip. Let us attempt to understand this point. The movement has ideological clarity, and persistent in its demand and opposed to privatization-corporatization. This is evident from the statements of the leaders of any farmer organization or farmers/farm-labourers involved in the movement and several rounds of talks with the government. The movement is democratic in nature, with the participation of peasant organizations with different ideological or political commitments. They are all included in the ‘Sanyukt Kisan Morcha’(United Farmers Front) with a resolve that the agricultural laws get repealed. The restraint, discipline and decency of the agitator leaders, despite the unfavourable conditions and the extremely hostile atmosphere, create confidence that the largest population of India has not lost its wisdom and conscience.

Even though the movement against agrarian laws was mainly taken up by the farmers of Punjab, Haryana, western Uttar Pradesh and to a lesser extent Rajasthan, it has attained an all-India character. Women and children of farmers’ families are also participating in the movement for the last more than 45 days on the borders of Delhi, fighting against the severe cold days and nights in the terrible shadow of Corona epidemic. The movement has received active support and cooperation at the national and international level including citizens associated with administration, business, sports, arts etc. The participation and support of most people are spontaneous. This has become possible only when the leaders of various farmers unions have made the movement strong and durable with proper mutual understanding and unity.

Punjab has set an example. The movement has broken all the stereotypes prevalent about Punjab – from drug-addicted Punjab to separatist Punjab. Village to village, house to house children, youth, elderly are reaching Delhi borders by tractors, tempos, buses, cars, three-wheelers, two-wheelers to give their turn in the movement. That too without creating any drama or any ruckus on the way or at the dharna-place. I was travelling on the road coming from Chandigarh to Delhi on 3 January. In a small tempo three children – two boys aged between 8 and 11 and a girl aged about 14 – with family were travelling to Delhi to join the dharna. To protect the children, ropes were firmly tied at the rear of the Tempo. Those pastoral children sitting behind the ropes network were going to Delhi to free their farming from corporatization! I waved my hand towards them. They responded promptly with smiles.

It cannot be expected from the peasant movement, it should not be expected in fact, to raise the flag against privatization-corporatisation outside the agricultural sector. The agricultural sector is larger than all other sectors in itself. Corporate houses are not oblivious of the potential of their tremendous profits. That is why they had got their eye on the agriculture sector since the beginning of liberalization. In the first phase of liberalization, several lakh farmers committed suicide. The ruling class of India was not deterred at all by those mass suicides. Another round of farmer suicides could come due to new agricultural laws. The ruling class will not care about that either. Four farmers have committed suicide at picketing sites during the present agitation.

In the wake of this movement, it should be hoped that the citizens from various fields supporting it will move beyond moral support towards understanding the implications of corporate-friendly policies for the nation and its people. The boycott of some of Ambani-Adani’s products may be strategically correct, but linking it to the boycott of the marketist-consumerist sub-culture will spread the consciousness of the movement. It would be better than the activist supporters of the movement coming from peoples’ movements and civil society leave the movement to the peasants only; And do not call for it to be a platform for freedom from fascism-Brahminism and Sanghwad. (the ideology of RSS). Farmers should let all sides/parties, including the Supreme Court, understand that these laws are not only against the constitutional federal structure but also against the basic spirit of the Constitution. If the debate is focused on the subject related to the movement, it will get greater cross-sectional support. The farmers should be allowed to compete on their own against the government/corporate policy/strategy regarding the movement.

The farmers of Punjab had made it clear at the outset that they had come to Delhi with a resolve for a long struggle and are committed to a peaceful movement. They are conducting negotiations with the government and are organizing various programs of struggle to exert pressure on the government. On January 7, they held a rehearsal to take out the tractor parade inside Delhi on Republic Day. If the struggle is to go on longer then more programs will be on their list. Farmer leader Rakesh Tikait has said that the movement will last till May 2024. Clearly, this statement has political implications.

I made a suggestion in my previous comment on the peasant movement that agitators should also pressurize the opposition along with the government. Opposition parties/leaders should be asked to make a promise that they will not corporatize the agricultural sector when in power. When this happens, the present government will come under pressure, and the opposition will not be able to leverage the movement for its own political gains. Then the independent dynamics of privatization-corporatisation will be hampered and new frontiers and avenues of struggle will open.