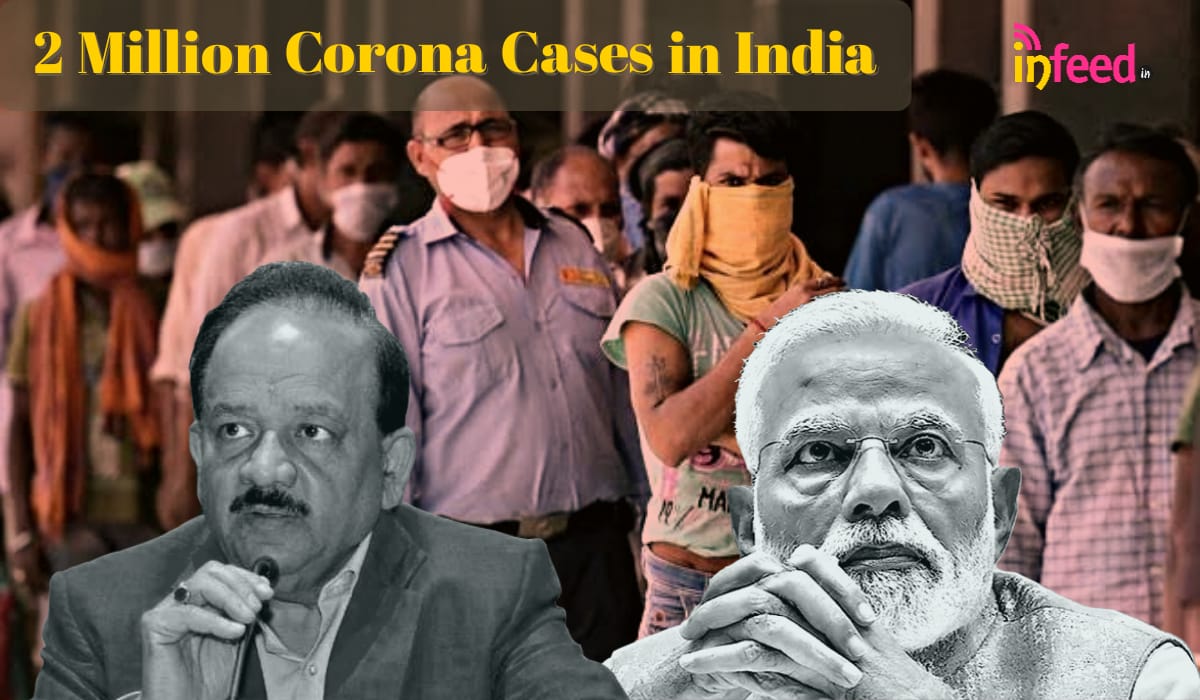 Corona has taken a deadly form in India with India crossing 2 million cases. With this, India became the third country after US and Brazil to report more than 2 million corona cases.How deadly the corona virus is spreading in India can be gauged by the fact that the number of cases of corona virus has crossed 20 lakhs here. India became the third country in the world after the US and Brazil on Thursday, where more than two million corona virus positive cases have been reported. The most frightening thing is that this second million has come in just 21 days.

The number of corona virus cases nationwide rose to 2022730 from 62088 new corona cases on Thursday. Corona’s dabbling rate is now 22.7 days in the country. This is several times higher than the dabbling rates of the US (60.2) and Brazil (35.7). If the pace of Corona remains the same, then India will reach number one in this table, which is a serious concern. Actually, dabbling rate means that in how many days corona cases are doubling.

If corona cases in the country grow at the rate so far, experts estimate that the next one million, or one million cases, may take more than just two weeks. That is, the next two weeks, the corona virus cases in India will cross 3 million. Let me tell you that there are currently 4,993,508 cases of Corona virus in America and 2,873,304 cases in Brazil.

At the same time, if we look at the statistics of death from corona virus in India, then its figure has crossed 41 thousand. The figure reached 41,633 from 898 deaths on Thursday. However, according to the data, the death rate has come down to 2.07 per cent, lower than the global rate of 3.75 per cent. While Corona’s death rate is 5.72 percent in the US, it is 3.81 percent in Brazil.

The recovery rate from Corona improved to 67.62 percent on Thursday. At present, 5,95,501 patients are being treated in the country, which is 30.31% of the total cases. The number of cured patients is currently 7,32,835 more than the number of people under treatment. A total of 46,121 patients were discharged from hospitals during 24 hours.