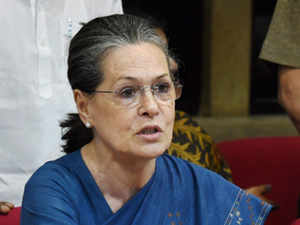 Congress President Sonia Gandhi, today slammed the Centre for making the stranded migrant laborers pay for their train fare to return back homes.
Highlighting the fact that Modi govt spent more than ₹ 100 crores during the Namaste Trump event and Indian Railways just donated ₹ 151 crores to the PM-Cares Fund, she said it was ‘disturbing’ that government was unable to pay the train fare of migrants who were left without food and money in this lockdown.

The Congress party declared in a press statement that Congress party will pay the train fare of migrants, the “backbone of our economy” and “ambassadors of our nation’s growth”.

“When our Government can find out it’s responsibility of arranging free air travel for our citizens stranded abroad, when the government can spend more than ₹ 100 crores on transport and food etc. for just one public programme in Gujarat, when the Railway ministry has the largesse to donate ₹ 151 crores to the PM’s Corona fund, then why can’t these essential members of our nation’s fabric be given the fraction of the same courtesy, especially free rail travel, at this hour of acute crisis,” Sonia Gandhi wrote in her statement this morning.

Indian National Congress has taken a decision that every Pradesh Congress Committee shall bear the cost for the rail travel of every needy worker & migrant labourer and shall take necessary steps in this regard: Sonia Gandhi, Congress President (File pic) pic.twitter.com/rmQ4ovsHhE

Several video clips have emerged in the past few days showing migrant workers begging for food and money to reach their native places. This has caused a huge uproar as the Congress party slammed the Centre for not providing any kind of economic assistance to the workers.

“Despite our repeated demands, the Centre and the Railway ministry have chosen to ignore their plight” Sonia Gandhi added.

“Hence, our party has decided that the Congress state units will bear the cost of travel of every single migrant worker”.