If India doesn’t give hydroxychloroquine, US will retaliate : Trump

If India doesn’t give hydroxychloroquine, US will retaliate : Trump 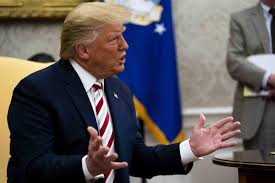 Washington| US President Donald Trump has indicated that India could face retaliation if it does not lift the ban on the export of Hydroxychloroquine medicine, which is being used to treat corona virus-infected patients. Earlier, Trump had approached Prime Minister Narendra Modi for this drug.

Speaking to reporters at the White House, Trump said that India has behaved very well with the US and I understand that there is no reason why India will not lift the ban on US drug orders. Trump said, ‘I didn’t hear anywhere that it was his (PM Modi’s) decision. I know that they have banned this drug for export to other countries. I talked to him yesterday. We had a very good conversation.

Trump said that during the recent phone call with PM Modi, the Indian Prime Minister had said that he would consider giving this medicine to the US. Trump said, “I would not be surprised that this decision would have to be conveyed to me by what we had discussed on Sunday morning. I told him that we would appreciate your decision to deliver the medicine. If they do not allow the drug to be given to the US, it is fine, but surely retaliation can take place and why should it not happen?”

Trump said that India and the United States have good trade relations and indicated that if India did not lift the ban on drug exports, US can retaliate. Earlier, Donald Trump had spoken to Prime Minister Narendra Modi and sought his cooperation to fight Corona. Hydroxychloroquine is an effective drug in fighting dangerous diseases like malaria.

Actually, corona virus infection which has taken the form of global epidemic is spreading rapidly in many countries of the world. Super power countries like Italy, Spain have also succumbed to this virus. America’s eyes are now focused on India in hope of some help. According to Trump, the drug hydroxychloroquine has also shown good results in the treatment of corona.

Every year a large number of people are affected by malaria in India, so Indian pharmaceutical companies produce hydroxychloroquine on a large scale. Now this drug is proving effective in fighting the corona virus, due to which its demand has increased. However, lack of raw materials has greatly affected the production of this drug. Due to the global lockdown, Indian pharmaceutical companies have demanded the government to airlift the raw material for this drug.