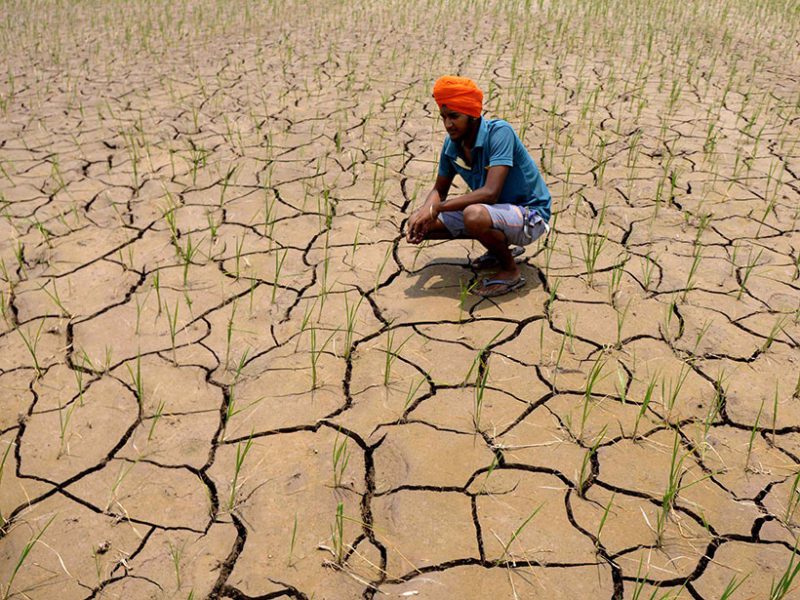 Punjab Chief Minister Captain Amrinder Singh is in a dilemma. After vehemently opposing the three new farm laws introduced by the Modi government, the Group of Experts headed by former finance secretary and Planning Commission Deputy Chairman Montek Singh Ahluwalia tabled a report recommending certain medium to long term economic measures that mirror the Central farm laws the unions are protesting against. Subsequently, the Chief Minister rejected the report terming it as anti-farmer. However, it is not clear what other option the Chief Minister has.

Overuse of groundwater is rapidly causing desertification of Punjab. In the pursuit of growing more rice and wheat, more than 1.4 million agriculture tube wells have been dug in Punjab over the past 60 years. On average, groundwater levels have sunk 51 centimetres every year. However, Punjab’s climate is not ideal for growing for rice. Growing rice requires a huge amount of water. More than 3.35 cubic meters of water is required for growing one kilogram of rice. An estimated 11 billion kilograms of rice grow in Punjab every season. This has been possible mainly because the Punjab government provides free electricity to farmers to pump out groundwater. This has caused the groundwater level to sink by 51 centimetres every year.

The report by the Group of Experts has also pointed out the same problem and recommended rationalizing electricity subsidies to reduce the usage of groundwater and change cropping pattern in Punjab. The state government’s allocation for power subsidies increased from ₹ 5,670 crores in FY19 to ₹ 7,180 in FY-21. This has left the government with little money to spend on manufacturing or services.

However, bringing in changes in Punjab’s agricultural sector is easier said than done.

In the mid-1960s, after the initiation of the Green Revolution, Punjab’s agricultural sector blossomed. Gifted with federal subsidies for fertilizers, pesticides and electricity, the state became the food bowl of India. Assured with a minimum support price (MSP) on rice and wheat, Punjab farmers started large-scale production of these staple crops. The Food Corporation of India last year collected 13 million metric tons of wheat and 11 million metric tons of rice from Punjab. However, this has been possible only because of the subsidized input resources and guaranteed selling price of the crops by the Central government. But this is not sustainable in the long run.

Referring to the latest groundwater estimates, jointly prepared annually by Punjab’s Department of Agriculture, Department of Water Resources, and the Central Ground Water Board, Vashisht said that “Punjab is consuming 166% groundwater for irrigation.”

The Chief Minister is aware of the problems and the long term impact of current agriculture policy. But decreasing government subsidies is likely to cause a massive uproar among the state’s farmers who are already up in arms against the Centre’s farm laws. As such, the report published by Montek Singh Ahluwalia-led committee has come at an awkward time.

The recommendations of the Group of Experts include rationalizing power subsidies and encouraging manufacturing and service sector in the state. Despite all the government support agriculture GDP in Punjab grew at a rate of 1.9 per cent per year versus 3.7 % for the country. This is because the price of other crops has grown more than the value of rice and wheat that Punjab grows in abundance. The report recommends moving a third of the area under paddy to other crops in the next 5-7 years. Plums, peaches, litchi, guava and vegetables like potato, peas and chilli are suitable for Punjab. Along with changing cropping pattern, the report also recommends developing a food processing industry which will also lead to job creation in the state. The Group of Experts has recommended the state government to negotiate with the Centre for a package to aid in this transition of Punjab’s agriculture sector and developing industries. However, herein lies the second part of the problem.

Ever since Narendra Modi came to power, several non-BJP states have been complaining about Centre’s biased attitude in disbursing funds to the states. Around ₹ 12,000 crores of GST and ₹ 1,100 crores of rural development fees are due from the Centre as per a report from the Punjab government. With the Chief Minister accusing the Centre of brinkmanship and imposing economic sanctions, there seems to be little scope of a financial package from Delhi to help Punjab in implementing the recommendations of the Group of Experts committee.

Politics seems to be taking the centre stage in this crisis which is threatening to turn the whole state into a desert. Both the Centre and the state government needs to cooperate with each other in this matter. While the Punjabi farmers may not agree with the farm laws, still the Centre needs to provide all the financial help necessary to encourage the growth of other crops and provide with direct cash transfer facility to let the farmers deal with the loss of electricity subsidy. This will also allow the Punjab government to redirect financial resources from providing subsidies towards the creation of industries and services in the state. The decrease in paddy cultivation will also decrease the usage of groundwater and the growth of other vegetables and fruits will create export potential for the state, ultimately increasing the income of farmers.