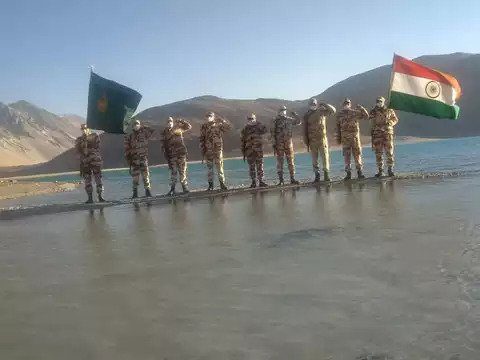 On the occasion of 74th Independence Day, ITBP jawans posted near Pangong Tso lake decided to go for a show of strength right in front of the Chinese troops who are occupying India’s Finger 5 area for the last 100 days.

As part of the 74th Independence Day celebrations, the official Twitter handle of ITBP released this video which is also being considered as a signal to China that any further incursion inside Indian territory will be made with stiff resistance and swift retaliatory measures.

Meanwhile, the atmosphere along the LAC remains tense as China has practically refused to move back from Depsang Plains, Gogra Heights and Finger 4-8 area of Pangong Tso, all which were patrolled by Indian troops till the end of April this year.

There has been a flurry of diplomatic activity between India and China for the last few weeks. However, the Indian embassy has not shared details about either of the two meetings – or for that matter why they were held as both the Communist party hierarchy as well as the Chinese government are aware of New Delhi’s stance on the border.

With stalemate along the border continuing, the ITBP celebrations right in front of Chinese eyes are acting as a morale booster for both the armed forces and the civilians.