Delhi violence to be discussed in RS today

Delhi violence to be discussed in RS today 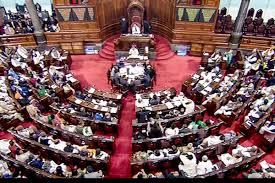 As soon as the proceedings of the Upper House began, the Opposition wanted to discuss the Delhi violence on Wednesday itself. The opposition also wanted a discussion on the two ordinances which were due to end. TMC, including Congress leaders Ghulam Nabi Azad, Anand Sharma, proposed to discuss Delhi violence.

The house was adjourned thrice due to the uproar. Meanwhile, Deputy Speaker Harivansh called a meeting of members of both the parties in his chamber which agreed to discuss the Delhi violence, including both ordinances, on Thursday. After the House adjourned for the third time at 3:40 pm, Parliamentary Affairs Minister Prahlad Joshi announced the concurrence made in the meeting.