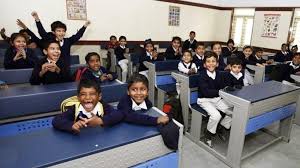 Students of Delhi’s government school will now be able to take Happiness Classes from home amid the lockdown due to Corona virus. Delhi’s Deputy Chief Minister Manish Sisodia announced on Saturday that the Happiness class is going to start for about eight lakh children in Delhi from Sunday. He said that children will be able to join the Happiness class from their home.

According to the tweet from the Twitter handle of Aam Aadmi Party, Sisodia said, “Happiness class will be done for children studying in government schools of Delhi. 8 lakh children will join the special class of Happiness Course and Mission Foundation from tomorrow. ”

Happiness class to be conducted at home for Delhi Govt. school kids.

Classes will take place through video conferencing due to Corona virus being closed in the capital amid nationwide lockdown. Sisodia said that Happenus class has an important role in this difficult time. He has been cited, in which he said, “Happiness class in this difficult time will be very important to give positive atmosphere to our children at home.”

Happiness class is conducted in more than 1 thousand schools in Delhi from Nursery to VIII. It is about 45 minutes, in which mediation, importance of education, mental exercises are done so that things like depression and intolerance can be reduced in children.