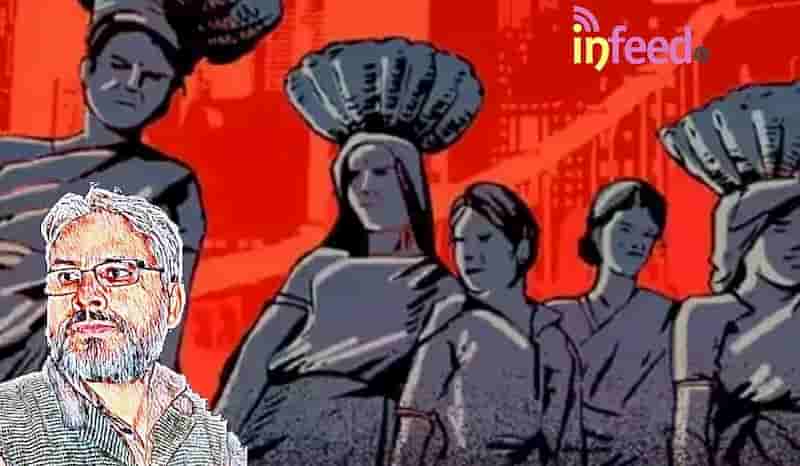 The country is one and a half months into the lockdown but the plight of the toiling labourers at the country-wide level continues unabated. Every day huge crowds of workers suffer from hunger, insult and alienation/ignorance in their own country, from their own countrymen and the images are for every one of us to see. It may be noted that these labourers mostly comprise of young men and women; their children are so small that they are either in the age of playing in their parents’ lap or going to school. They all are desperate to go to their parents and near and dear ones, because of the loss of work and related income. This is also a young India, whose picture is displayed on streets-mohallas-roads-squares-railway stations-bus stations across the country.

It is also a matter to be noted that this young India has a lot of courage and vitality. The corona virus has turned the world into a death knell. But these workers do not have the same fear of death, as felt by those who can stay safe in their homes. They are walking on a journey of thousands of kilometers, taking the path apart from the highways, escaping from the eyes of the police. While on their return journey to home on one such path, 16 migrant labourers from Madhya Pradesh died after being crushed under a goods train in Aurangabad, Maharashtra. It can be seen from day one of the lockdown that the government has no clear policy regarding migrant or resident labourers. Knowing that 90 percent of the country’s labour force is in the informal sector and uprooted, it uses digital mediums for information and schemes related to them. After all ‘those who go blind in spring see only green!’

These are visible proofs of the plight of the workers that their sweat is included in the ‘5 trillion economy’ of the country, but they are not part of the same. Apart from these labourers of unorganized sector, labourers of organised sector, marginal farmers, semi-full unemployed fare no better. The lockdown did not throw them on the streets, but has certainly put them in a crisis of livelihood. The thing to be noted the most is that the government has no discomfort with this plight of the majority of the country’s population. The question of fear would be a remote possibility. The reason for this worrying phenomenon can be easily identified in the very scenario of the plight of the workers spread all over.

The details of the interaction with the workers in the media surprisingly show that the workers have no complaint with this situation. They speak about somehow reaching their homes in this crisis, and returning to work after the lockdown is lifted. They give information about loss of job, no place to stay, non-availability of ration in a passive manner, however they harbour no complain against the government. The International Labour Day (1 May) also occurred during the period of lockdown. As has been a practice world over, the pride and struggle of the working class was remembered by the workers’ organizations and the governments. But the workers who are facing the biggest disaster of their lives, seem untouched by the inspiration of the Day associated with their identity. The revolutionary labour consciousness,which has been very eloquently delineated by the progressive leadership time and again, was found missing from the interactions of these workers.

India has the highest number of trade unions in the world. About a dozen of them are of national/international level and thousands are of local level. Most of the trade unions all over the world including India are associated with progressive ideologies like socialism, social justice, welfare state etc. Trade unions communicate with governments or/and industrialists on the issues of workers’ salary-bonus, service conditions, working hours, working conditions, etc.They wage struggles in the interest of the working class when needed. The large labour organizations also play a role in the formulation/change of labour laws at the national and international level.

Needless to say that India’s labour movement has been a victim of a deadlock for a long time. In 1991, the New Economic Policies were directly imposed on farmers and laborers. With the introduction of the New Economic Policies, process of abolition of the public sector was started in the country and the private sector was established at its cost. It was a paradigm shift in the political economy of the country. Simply put, the economy of the country was taken off the axis of the Constitution and mounted on the axis of the pioneering establishments of the market economy – the World Bank, International Monetary Fund, World Trade Organization etc. No economy can exist outside politics. So, politics and leadership of the country, more or less, became an agent of market economy in a rapid manner.

The year 1991 should have been the occasion when the labour movement should have entered into a new phase. But the leadership associated with political parties or independent trade union leadership did not rise to the occasion. Governments continued to change the labour laws one after the other in the name of ‘reforms’ in favour of the corporate houses and the trade unions merely sat down with some ritual resistance programs. As a result, the working class of India has also become almost as apolitical as the rest of society. Due to a-politicization of much of India’s educated middle-class which although is wrapped in modern dress and lifestyles, does not accept the modern value of equality; not even that part of society which has entered the middle class under the constitutional provisions of social justice. Due to this phenomenon, in the last three decades, a deep foundation of counter-revolution has been laid in the country and the huge suffering of working class of the country is its result. Leave the revolutionary consciousness, it does not appear to be aware properly of its labour rights either. It is not without reason that the Bharatiya Mazdoor Sangh (BMS), affiliated to the Rashtriya Swayamsewak Sangh (RSS), has emerged as the largest trade union of India during this period.

Before the lockdown, it was necessary that the workers be provided with financial assistance under a proper and comprehensive economic package. The government did not do this because its priority is not the labourers, but the capitalists. The government has prepared itself to implement the pro-corporate neo-liberal economic policies more firmly on the pretext of the corona pandemic. For example, Minister of Micro, Small and Medium Enterprises (MSME) Nitin Gadkari has said that despite the pandemic, the prime minister’s dream of making India an economic superpower will be realized. In a TV program, one of the Ambani brothers said that the economy will be stronger despite the corona pandemic under the leadership of visionary prime minister. The prime minister and the Cabinet have decided that further emphasis will be placed on foreign and local investment in order to strengthen the economy. Resource persons of neo-liberalism are even claiming that India will play a leading role in the new world order that is being created after the corona pandemic!

To make the economy strong the government has targeted the workers first and foremost. It has promptly started the exercise to make labour laws ‘simpler’. In a video discussion with the chief ministers, the prime minister praised Rajasthan chief minister Ashok Gehlot’s suggestion of 12 hours of work instead of 8 hours, calling it an important step in the direction of ‘reforms’. The labour laws fall in the concurrent list of the Constitution. By praising Gehlot’s suggestion, the prime minister conveyed his intention to the states to weaken the labour laws. The chief minister of Uttar Pradesh has announced the postponement of almost all labour laws, including the Minimum Wages Act, for the next three years through an ordinance. The governments of Madhya Pradesh, Gujarat, Rajasthan, Odisha, Punjab, Maharashtra have also decided to dilute labour laws in one way or the other. The other states can also do the same. That is, the economy is a matter between the ruling classes and the corporate houses of the country, the workers do not feature anywhere in the picture. (However, it is clear from the suggestions made by the main opposition party Congress to the government during the entire corona crisisthat its belief in giving a human face to the neo-liberal reforms is still intact.)

The government has openly showed its counter-revolutionary character. It is for the strengthening of the same economy, due to which lakhs of farmers have committed suicide and 50 crore labourers have been transformed into cheap labour. The government knows that it faces no real resistance. Trade unions and labour leaders have opposed decisions of the state governments to change or repeal labor laws. Ten national level trade unions have also announced to protest against these measures once the lockdown is lifted. This is important. But at the same time, it is also important that in view of the plight of the workers, the real question should be brought to the center of concern and discussion. The real question is about the economic policies due to which the workers across the country have been made to face this plight.

Some secular intellectuals who are advocates of neo-liberalism are saying that what the state governments have done is not the correct meaning of ‘reforms’. They, in fact, want to create confusion. In the epistemology of neo-liberalism, ‘reforms’ have had a definite meaning from the very beginning. From 1991 onwards, adhering to the same meaning the strength of labour laws has been diluted in favouring the interests of corporate vis-a-vis the labourers. It has also been heard from some constitutionalists that the devaluation or postponement of labour laws by the Central or State Governments is against the Fundamental Rights and Directive Principles of the Constitution. But these very experts of the Constitution do not see that the neo-liberal policies implemented in 1991 were inherently contrary to the Constitution.

The economy is always a political economy and cannot be changed without changing the politics. If the government has turned the corona pandemic into an opportunity for itself then even the genuine opponents of the existing corporate capitalism can also do the same for themselves by making sure that the experience of labourers, peasants, semi-full unemployed during the pandemic period not be easily forgotten. If their experience is politicized, then there will be a new manifestation of labour consciousness, and a ground will be created for an alternative politics vis-a-vis the present corporate politics.