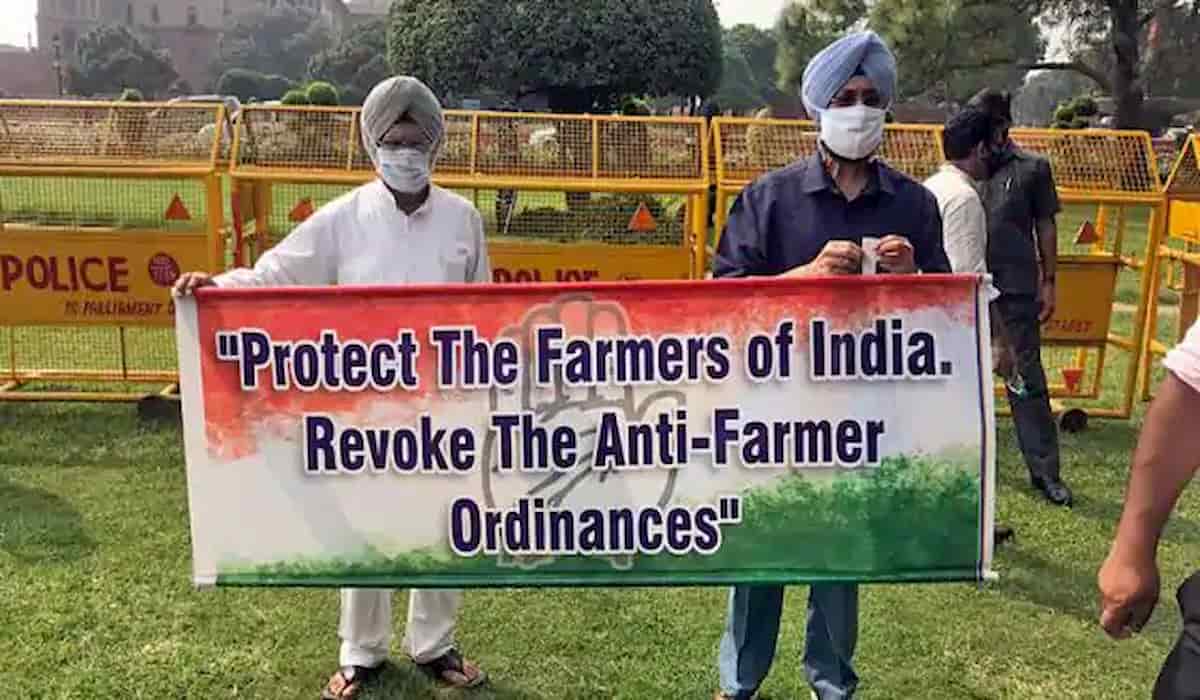 Congress is all set to corner the government of Agriculture bills to be produced in Rajya Sabha today by the Agriculture Minister Narendra Singh Tomar. It has released a whip for all members to be present in the today’s functioning in the parliament.

The NDA does not have a majority in the Rajya Sabha. Along with this, the NDA constituent Shiromani Akali Dal is also against these bills. Such Congress is liaising with other non-NDA parties. The party will demand to send these Bills to the Select Committee during discussion. For this, there is absolutely no pressure on the government.

A Rajya Sabha member of the Congress said that our demand would be that the government send the Bills to the Select Committee for wider discussion. If the government does not do so and tries to get the bills passed, then the opposition will demand voting on it. The bill will make it clear that in the parliament who stands with the farmer and who are with the BJP.

BJP leaders believe that if the ruling party gathers the support of the BJD, TRS, YSR Congress and AIDMK, then the government will have the number to pass the bill in the upper house.

This bill can be brought in the Rajya Sabha on Monday. In view of this, BJP has also asked its MPs to be present in the house on Sunday However, in the meantime, the demand from the opposition has also started raising that the Bills should be sent to the Selection Committee. In view of the opposition of the farmers, it has also started to arise within the BJP that the bill should be ensured in the Bill, not buying less than the MSP, to end the fears.

The DMK announced the convening of a meeting of its allies in the wake of formulating a strategy against the agricultural bills. This meeting will take place on 21 September. In this meeting, further strategy and steps will be discussed regarding the opposition to the agricultural bills passed in the Lok Sabha. DMK President MK Stalin alleged that these bills would lead to hoarding of agricultural products by corporates and adversely affect the support price.

A 70-year-old farmer died after consuming a poisonous substance during a protest against new agricultural bills in Punjab’s Muktsar district. Police gave this information on Saturday. Pritam Singh, a resident of Akkanwali village in Mansa district, consumed some poisonous substance on Friday morning. He later died in a hospital. Singh was participating in a demonstration organized by the Bharatiya Kisan Union (Ekta Ugrahan) in Badal village from 15 September. It is the ancestral village of former Chief Minister Parkash Singh Badal.