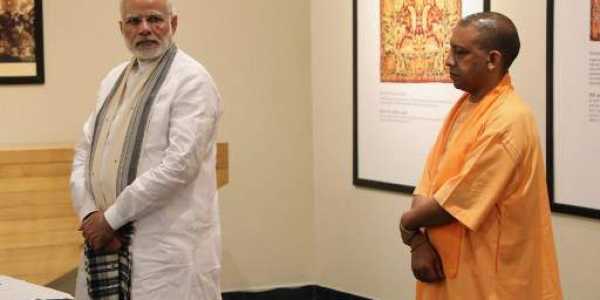 Ayodhya| While the nation has been kept in lockdown and severe actions are being taken against the people who are breaking the 21-day lockdown instructions, and rightly so as the PM has asked the people not to gather at a place. Due to this all the social and religious proceedings have been banned, so that people do not accumulate at any place, but BJP’s party leader and CM of Uttar Pradesh, Yogi Adityanath, has shown presence in a religious ceremony held in Ayodhya, by defying all the rules.

It is being told that around a dozen people participated in the ceremony which is a clear violation of guidelines of home affairs order number 40-3/2020 dated 24.3.2020.

Twitter users started trolling Yogi Adityanath and asking if UP is a parallel universe? However, there has been no statements from CMO in this regard.

Hours after a total lock down was announced by @narendramodi with no religious exemptions , @myogiadityanath , surrounded by atleast 20 people , in ayodhya this morning , made this appeal for everyone to ‘follow lock down boundaries’ !! UP is a parallel universe ! pic.twitter.com/6AqX2dMzec