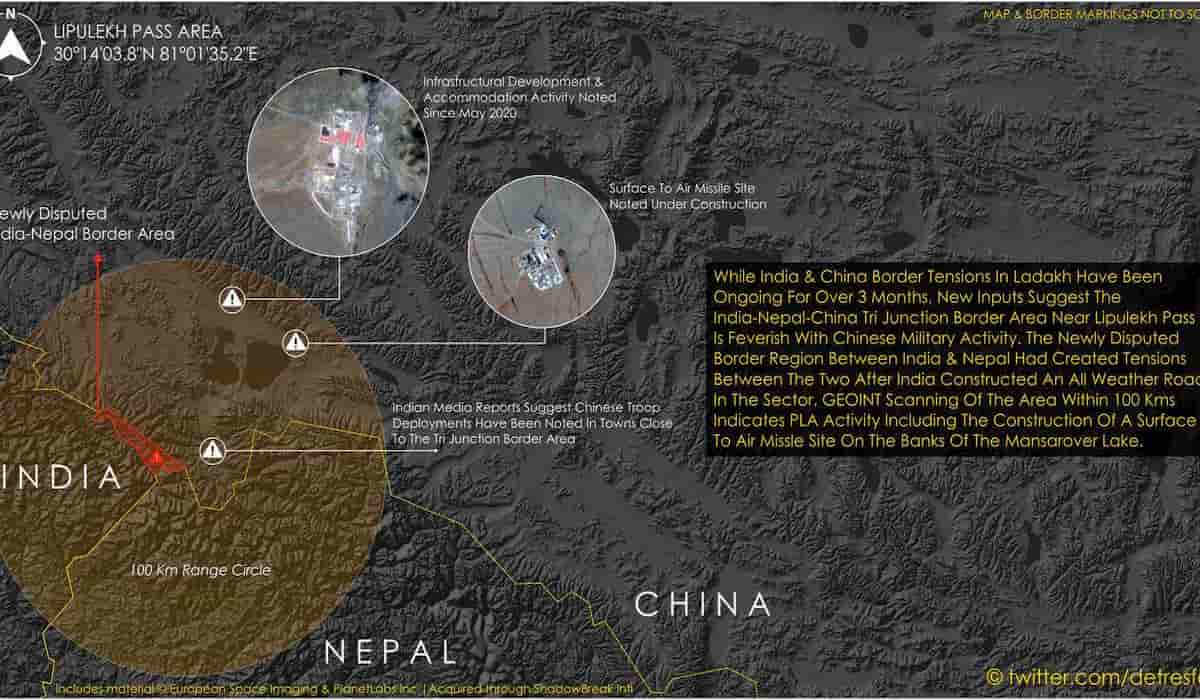 New open source satellite imagery suggests China has stepped up work on military infrastructure, including a surface-to-air missile site, in the area opposite Lipulekh region in Uttarakhand amid the standoff along the Line of Actual Control (LAC).

The mobilisation of a battalion by China’s People’s Liberation Army (PLA) near Lipulekh Pass, one of the locations outside of the Ladakh sector that have witnessed movement of Chinese troops in recent weeks, was first reported by Hindustan Times on August 2.

The satellite imagery, shared by the open source intelligence analyst who uses the name @detresfa on Twitter, show what appears to be two sites at which the PLA is creating new infrastructure and accommodation. Both sites are not very far from the Kalapani-Lipulekh region that is at the heart of a new border row between India and Nepal.

A graphic included in the tweet said: “While India & China border tensions in Ladakh have been ongoing for over 3 months, new inputs suggest the India-China-Nepal tri-junction border area near Lipulekh Pass is feverish with Chinese military activity.”

The two sites are located within a radius of 100 km of the Kalapani-Lipulekh region that has been depicted as Nepalese territory in a new political map issued by the government of Prime Minister KP Sharma Oli.

The India-Nepal border row erupted after New Delhi opened a new road to Lipulekh region to facilitate pilgrims travelling to Kailash-Mansarovar. Nepal responded by lodging a protest and then issuing the new political map that included Kalapani, Lipulekh and Limpiyadhura, which are all controlled by India.

India has disputed Nepal’s claims and the border row affected bilateral ties. However, Oli spoke on phone with Prime Minister Narendra Modi on August 15 and said Nepal looks forward to meaningful bilateral cooperation with India. India and Nepal also held a meeting of a high level mechanism that oversees bilateral projects on August 17, though there is no sign as yet of the two sides holding talks on the border issue.

In a separate tweet, @detresfa posted open source satellite imagery that appeared to show Chinese troop deployments in Gar county of Tibet, south of Pangong Lake, one of the key friction points in the current standoff. The tweet said these Chinese deployments were “suspected to either resupply or respond to potential issues arising from the dispute”.

A graphic attached to the tweet said the PLA’s deployments “across its western military theatre continue to remain on alert” and on the field. At Gar county, located 180 km south of Pangong Lake, there has been “auxiliary construction & development in progress meant to aid pre-existing military infrastructure, along with a large volume of tents sprawled across the city”.

“Assisted by logistical and mechanical support the area is a suspected military basing prepared to respond to potential issues arising from the border dispute,” it added.

Among the infrastructure reportedly being created in Gar county is a helipad, other military sites and barracks.