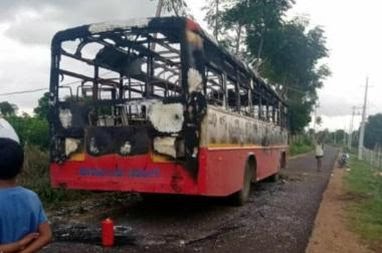 Buses were torched and schools and colleges shut as a precautionary measure as the Karnataka Congress called for a state-wide bandh on Wednesday to protest against the arrest of its troubleshooter DK Shivakumar by the Enforcement Directorate under the Prevention of Money Laundering Act (PMLA) after a long session of interrogation.

Soon after the Kanakapura MLA’s arrest, protests erupted across Karnataka, which turned violent in Bengaluru Rural and Ramanagaram districts, which are Shivakumar’s strongholds.

Congress supporters blocked the Bengaluru-Mysuru highway and four KSRTC buses were stoned. The bandh is expected to hit Bengaluru and affect the Bengaluru-Mysore traffic. The districts’ schools and colleges are shut.

Over 10 buses were torched and stones were pelted in Satanur on Tuesday night, following which the state police has asked the Karnataka State Road Transport Corporation (KSRTC) to not operate buses in Ramanagara until clearance is provided.

To thwart untoward incidents, the KSRTC buses have re-routed in the wake of ugly protests. The Mysore-Bengaluru services have been restricted and are operating via Magadi, Huliyurudurga. The state police has stopped public buses at Bidadi.

The police have also issued an advisory for commuters about road block and deviation information, which mentions that the Bengaluru-Ramanagaram-Mysuru road has been blocked due to protests at the Ijoor circle.

Meanwhile, security has been beefed up near Chief Minister BS Yediyurappa’s residence and around the BJP offices in Congress’ strongholds.

Shivakumar will be produced before a court here on Wednesday where the ED will seek his custody, the officials said. The agency wants the Congress leader to be put through custodial interrogation and hence arrested him, they added.

Soon after his arrest, tweets put out from Shivakumar’s official handle described the cases against him as “politically motivated”.

“I appeal to my party cadre, supporters and well-wishers to not be disheartened as I have done nothing illegal. I have full faith in God and in our country’s judiciary and am very confident that I will emerge victorious both legally and politically against this vendetta politics,” said another tweet.

Shivakumar’s supporters, who had gathered outside the ED office, raised slogans and tried to prevent probe officials from taking him for a procedural medical check-up after his arrest.

Condemning the move, the Congress described the arrest as “high-handed tactics and vendetta politics” being deployed against its leaders. “The arrest of Shri DK Shivakumar is yet another attempt by the government to distract the public from their failed policies and the sorry state of the economy,” the party said in a tweet.​