Baba Ramdev does the Savarkar, writes an apology letter.

Baba Ramdev does the Savarkar, writes an apology letter. 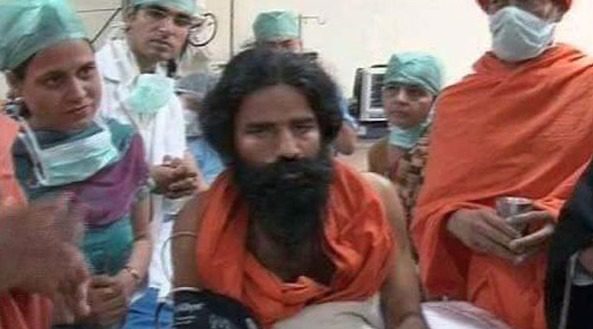 Baba Ramdev does the degradable act which all Savarkar followers do. Savarkar is famously known for apologizing to the British when all Indians were sacrificing life for the Nation.

Recently Baba Ramdev claimed that lakhs of people have died due to allopath & modern medicine. He stated, “Allopathy is such a stupid and bankrupt science, first chloroquine failed, then Remdesivir failed, then their antibiotics failed, then their steroids failed, now a ban has been imposed on plasma therapy, now they are prescribing Fabiflu, which too has failed”.

Indian Medical Association(IMA) had demanded the government to take action and book Ramdev under epidemic disease act for spreading misinformation based on fake WhatsApp reports blaming allopathy and modern medicine for all the covid deaths in India. The IMA also requested the union ministry to either take action against Ramdev or dissolve the modern medical facility. Adding the IMA said,
“If the union minister does not take suo moto action, we will be forced to resort to democratic means of struggle to propagate the truth to the common man. We will knock at the doors of the judiciary to get due to justice”.

Union Minister Dr. Hashvardhan wrote a letter to Baba Ramdev requesting him to withdraw remarks against allopathy as it had hurt the country’s sentiments by disrespecting Corona warriors. As the Union minister is a trained allopathy doctor strict action was anticipated or demanded proof for calling allopathy a Stupid Science rather than requesting to withdraw the statement.

Baba Ramdev wrote a letter addressing Union Minister Dr Harsh Vardhan. The letter mentions that He respects allopathy science which has progressed a lot and saved millions of lives. He regrets the controversial statement that has hurt the sentiment of the medical fraternity.

Baba Ramdev doesn’t have the spine to stand for what he believes. Instead of making the false claim that lakhs of covid effect people have died due to allopathy and modern medicine he must provide scientific evidence, prove it to the people of India and take the matters to court. Ramdev is a habitual offender for making such claims without any conclusive evidence.

Previously Ramdev has attacked the modern medicine fraternity by claiming that western medicine was resorting to medical terrorism.
Incidentally, Baba Ramdev’s aide and Patanjali’s co-founder Balakrishhna was admitted to AIIMS when he was suffering from food poisoning.