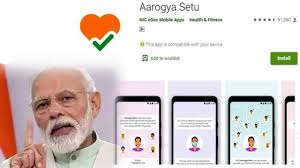 Within 13 days of its launch, Aarogya Setu App has hit 5 Crore Users. Yesterday Prime Minister Narendra Modi has encouranged its download in his 10 am address to the nation, after which the app added one crore new users.

The app is projected to enable contact tracing to limit the spread of the coronavirus outbreak in India. After its launch on April 2, the app crossed a milestone of 5 million users within three days.

Besides, PM, various government authorities and educational boards including CBSE have promoted the app through their platform.

The app, which is a corona virus tracker sort of thing, helps people to know about the possible hotspot zone around them, which can help people stay safe and avoid community transmission to an extent. It also helps people to imform them about the symptoms, alert them about the safety precautions to be taken in order to save themselves from the novel virus