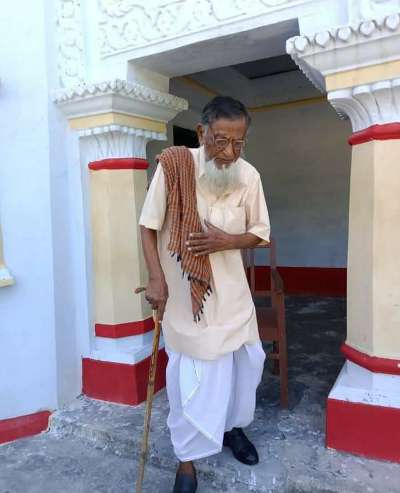 Mo Zainul Haq Khan, the person, who donated his land for the construction of proposed Virat Ramayan Temple, in Kaithavalia-Bahuara in East Champaran district who has been in the limelight of the indigenous and foreign media for many days, is no longer in the world. Mo Khan, a resident of Kundwa village under Kesaria block of the district, took his last breath today at his ancestral residence at the age of 98. He left behind a whole family with two sons and five daughters. His wife died five years ago.

Giving the above information, his nephew said that late Khan was a famous person of the area and a signature of Hindu-Muslim unity. During his youth, he was also a famous contractor and a well-known wrestler in the district. According to his nephew, for the construction of the proposed Ramayana temple, the families of Marhum Zainul Haq Khan and his two late brothers, Manul Haq Khan and Jamil Ahmed Khan respectively, have so far given their five acres of land to Sri Mahavir Place Trust Committee.

president of Bihar Religious Trust Board and former IPS officer, has expressed grief over the demise of Zainul Haq Khan, the principal landowner of the proposed Virat Ramayana temple. In his condolence message issued today, Acharya Kunal said that Marhum Zainul Saheb was a good-natured human being who respected all religions. We have lost a heritage with his death.

The president of the proposed Virat Ramayan Temple, has reported the death of Zainul Haq Khan as irreparable loss.