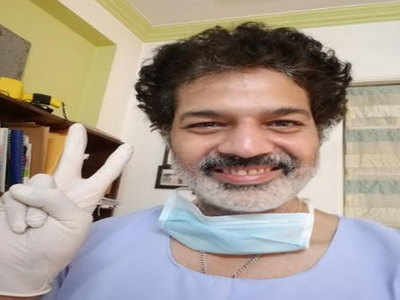 The whole country is currently battling the Corona Virus epidemic, but Ashwini Garg, who was a captain in the Merchant Navy for 15 years, beat Corona even after five positive reports. On the advice of his brother living in Germany, he did yoga and pranayama based on special techniques. Ashwini told that with the help of Yoga Pranayama, Corona did not let a single moment dominate. On Friday night, he was discharged from Meerut Medical College.

Ashwini, who returned home after winning the battle with Coron, told media on the phone that his brother Priyadarshi Sharma from Heimberg, Germany, received a call from him while undergoing treatment at the medical college. He sent the video of Vashistha Yoga Foundation’s yoga guru Dheeraj to Asana Pranayam and advised him to do it. Meanwhile, his test report of COVID-19 positive had come three times. On the advice of his brother, he started doing yoga on the method suggested by Yoga Guru Dheeraj from 9 April. Doing Vashistha Pranayam in particular was very effective.

Along with this, on his instructions, he did special pranayama by combining Anulom Vilom, Bhramari and Ujjayi. This increased his breathing capacity and made him feel stronger mentally as well. The body used to get rest from the Vasishta pranayama done by lying down. Kumbhak (special technique of stopping breath) increased his inner capacity. He told that he used to practice yoga pranayam for at least three hours every day during the treatment in the hospital.

On 12 April, his test came positive, but the blood test was showing improvement. His fifth test came on April 15, six days after starting yoga. He claims that doing yoga for two weeks increases WBC in the blood. Mental strength also increased.