Why Climate change is the new normal?

Why Climate change is the new normal? 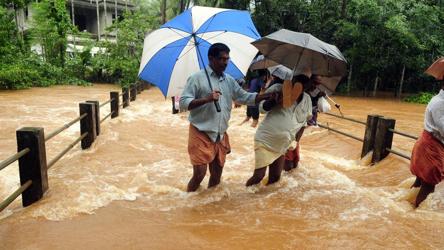 After the devastating floods in Bihar and Assam, it’s now the turn of five other states — Gujarat, Kerala, Karnataka, Maharashtra, and Uttarakhand — to be battered by unrelenting rain and floods. At least 200 people have been killed, and 1.2 million affected in these five states. According to the weather website, El Dorado, out of the 15 places that have received most rainfall across the globe in the last 24 hours (Sunday-Monday), eight are in India. While such extreme weather conditions these days are usually attributed to climate change, there is no point blaming merely that phenomenon any more for the fallout; instead, it’s best to accept such extreme climate episodes as the new normal and find out ways to minimise their impact .

One of the key reasons why floods have a devastating impact on cities and towns is because the excess water does not have enough space to drain. This is because the stormwater channels are clogged with plastic, and water sinks, such as wetlands, floodplains, or riverbeds have been destroyed by encroachments and excessive construction. The impact of such unplanned development was seen in the floods of Mumbai (2005 and 2017), Uttarakhand (2013), Srinagar (2014), Chennai (2015), and Kerala (2018). As for how plastic increases the threat of floods, one needs to just see the photograph from Palakkad, Kerala, that went viral last week. The photograph showed an area in the district full of plastic bottles and other waste materials that were brought back by the floods. While many cities have banned plastic, the implementation of the law has been very weak.

The recent round of floods has also raised questions about dam management in India. This issue has come to the fore after reports said that despite early warnings about heavy rainfall in the states, Maharashtra and Karnataka failed to release water from the dams on time. An August 2019 report, Krishna Basin Floods in Maharashtra – Karnataka: How dams harming rather than helping of the South Asia Network on Dams, Rivers, and People has said that the dam operators could have acted prudently by releasing the dam water in July. The report further says that the government hasn’t learned any lessons from the past incidents and that the capacity of the catchment areas to hold and absorb and store the rainwater is reducing with time. All these issues need to be tackled if India wants to weather the climate storm.