When Mt. Everest looks more crowded than your neighborhood market

When Mt. Everest looks more crowded than your neighborhood market 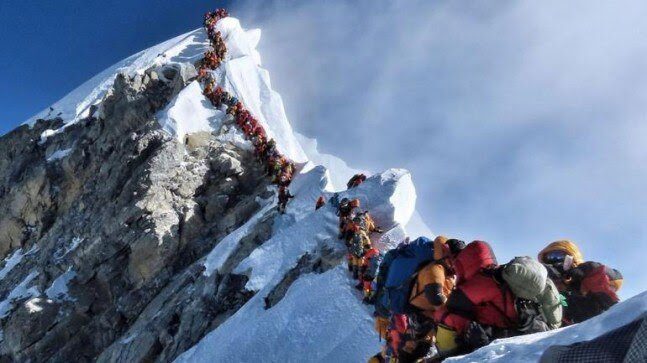 Reaching the highest point on earth one would expect to be in complete isolation admiring the stunning view from the summit. But every summer Mt. Everest witnesses bizarre site of long line of people trying to get their opportunity to stand on the peak which is of the size of just around two ping pong tables.

However, this year’s climbing season has been particularly bad with 10 deaths occurring not because of avalanche or bad weather but because there were just too many people, many of them being inexperienced climbers.

Those who went there described it as a ‘zoo’ with people shoving each other for selfies. At least 15 to 20 people were trying to stand up on the flat part of the summit, with dead bodies lying here and there.

Fly-by-night adventure companies are taking up untrained climbers who pose a risk to everyone on the mountain with cash strapped Nepalese Government too issuing more permits than Everest can safely handle.