Weirdest Types of Lightning, look at some rarest and scariest lightning

Weirdest Types of Lightning, look at some rarest and scariest lightning 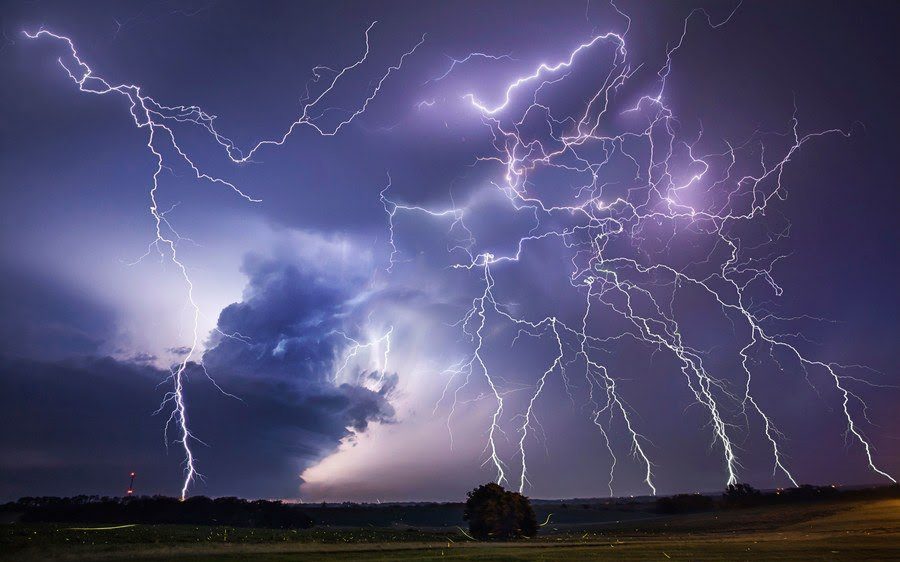 There’s more to lightning than just the bolt emoji or the little streak on Harry Potter’s forehead. If you’ve ever been caught in a thunderstorm and dared to look up at the sky, you know that lightning can take on a variety of terrifying shapes. But it’s about more than just looks: Some types of lightning are also deadlier than others. Look at some of the rarest, weirdest, and scariest forms of lightning out there.

These weird little bursts of lightning are almost as mystical as the imaginary creatures of fairy tales. Sprites are red, jellyfish-shaped bursts of electricity that dance above thunderstorms, which start as balls of light that then begin to stream downward. They seem to be caused by lightning shooting out below stormclouds, which create an imbalance of charges above them.

Scientists first caught them in the act in the late ’80s and early ’90s, but pilots had seen them dancing above the clouds for decades before that. They wouldn’t dare report what they’d seen before scientists confirmed their existence, however. “… no pilot was willing to acknowledge seeing them up there until then, since they thought it’d cast doubt on their mental state,” researcher Hans Stenbaek-Nielsen of the University of Alaska at Fairbanks told. “If you blink, you don’t see them … they last on the order of 10 milliseconds.”

Elves aren’t so different from sprites. They’re ultra-fast and ultra-bright. Like sprites, you can see elves above the clouds in broad daylight. But rather than dancing balls, elves appear as rings or halos. And they’re not small — elves can be up to 185 miles (300 kilometers) wide.

Both elves and sprites get their mythical names from one researcher: meteorologist Walt Lyons. Like many names in science, they’re creative acronyms: “sprite” stands for “Stratospheric/Mesospheric Perturbations Resulting from Intense Thunderstorm Electrification” and “elve” stands for “Emissions of Light and VLF perturbations from EMP events.”

This weird form of lightning doesn’t produce much visible light at all. While regular lightning is made up of relatively slow electrons that carry electrical currents through clouds or toward the ground, dark lightning is made up of high-energy electrons that collide with air particles to produce dangerous gamma rays. These terrestrial gamma rays flashes, or TGFs, are among the highest-energy light that naturally occurs on Earth, according to NASA. They’re so powerful that they can blind satellite sensors hundreds of miles away.

When pilots steer planes through thunderstorms, dark lightning in the middle of clouds can produce gamma-ray flashes that strike passengers, sometimes dosing them the same amount of radiation as produced by a full-body CT scan. But TGFs are incredibly rare and scientists generally think the radiation risk posed by them is minimal, so they’re not a reason to avoid flying altogether.

Ball lightning looks just like it sounds, and almost no form of lightning is as mysterious. For centuries, people have reported sightings of slowly rotating balls of light — often about the size of a grapefruit — floating above the ground during electrical storms. Sometimes the ball passes through a closed window or appears in the middle of a room, but almost always, it blinks out of existence after about 10 seconds.

But what could possibly make a ball of light appear in the sky? Until the last few decades, scientists didn’t have a clue. It wasn’t until 2012 that ball lightning was first captured on camera, and since then, there have been numerous theories as to its true cause. The latest comes in a new paper published in the journal Optik, which says that the spherical shell is full of highly compressed air, which makes white light rotate in all directions like a ball rolling around in the sky. The researchers noted that the intensity of this rare lightning is almost a billion times greater than lightning that moves in a straight line.

As we’ve already ascertained, lightning is still a bit of a mystery to scientists. But the leading theory about how it works is that as ice particles knock around in the clouds, they either gain or lose electrons to form positive or negative charges. The bolts you see most often are those of negative lightning, which happens when those negatively charged electrons at the bottom of a cloud connect with the ground. Positive lightning, on the other hand, makes up only 5 to 10 percent of the lightning you see. It comes from the positively charged particles that gather at the top of a cloud, which usually just end up connecting with the negatively charged ones at the bottom. But when those get out of the way, like at the end of a storm or in a strong wind, positive lightning can strike the ground. There’s a reason it’s referred to as a “bolt from the blue” — it often comes in clear skies.

Positive lightning is what you need to watch out for. Not only does it tend to come after the storm seems to have passed, but it also produces much more energy. Whereas negative lightning produces 300 million volts and 30,000 amps, positive lightning can produce nearly a billion volts and 300,000 amps. It’s rarer, but it’s also more deadly. Just one more reason to be careful during a thunderstorm. If you think the storm has passed, wait a while longer just to make sure.