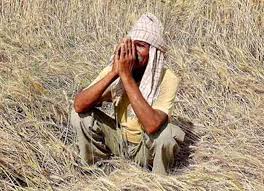 Be it Gorakhpur, Kushinagar, Pilibhit or Shahjahanpur – corruption allegations are surfacing to the fore about the purchase of paddy. Farmers say that if there were no sacks at the paddy procurement centers, then the paddy continued to be returned saying the moisture was there and the warehouse was filled with the help of officers.

From Uttar Pradesh Chief Minister Yogi Adityanath to his minister, these days, wherever they are going, they are patting their backs for the record purchase. It is claimed that the Yogi government had targeted to procure 50 MT of paddy by 28 February, while 58 MT of paddy was procured in January itself. But this picture is not as golden as it is looking. Due to the complicity of unauthorized officers, thousands of tonnes of paddy were procured, and elsewhere the godowns were filled with paddy in Bihar.

A breakup has emerged in the purchase of paddy in Deoria, the home district of the state agriculture minister Surya Prakash Shahi. Investigations in Deoria district revealed that five rice millers showed crores of rupees by showing the sale of paddy in Bihar. No action has been taken so far in the investigation conducted under the instructions of the District Magistrate. The investigative ADM, Finance and Revenue, Umesh Kumar Mangla bluntly replies that the investigation report has not come yet.

Cases of corruption by opening accounts in several banks with the same name have also been exposed in Tilhar in Shahjahanpur district. Purchases worth more than 100 quintals were sent to farmers with ten bigha land. Shahjahanpur District Food Marketing Officer Abhilash Chandra Sagarwal has lodged an FIR against four center incharge of five procurement centers in different police stations on serious charges.

Purchase of 30867.40 quintal paddy from 350 farmers has been shown at the purchasing center of Tilhar Mandi. Out of these 12 people have accounts in many banks. Lakhs of money have been sent to his account. The mafia has made lakhs of rupees by making the people with Jan Dhan account as pawns. His account was misused by luring a few rupees. Interestingly, in Shahjahanpur, the administration had shut down the internet in protest against the CAA. Even after this, paddy purchase took place.