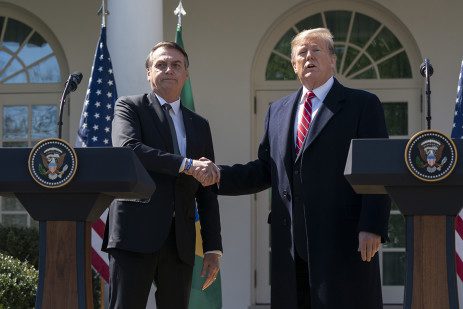 President Donald Trump gave Brazil’s Jair Bolsonaro his full backing Tuesday as the region struggles to contain wildfires wreaking havoc in the Amazon rainforest and as Bolsonaro rejected a pot of international aid to fight the blazes.

“I have gotten to know President @jairbolsonaro well in our dealings with Brazil,” Trump said in a tweet. “He is working very hard on the Amazon fires and in all respects doing a great job for the people of Brazil – Not easy. He and his country have the full and complete support of the USA!”

Brazil on Tuesday said it would reject $20 million in aid money offered by G-7 nations after this weekend’s summit to battle the massive fires that have threatened one of the world’s greatest sources of biodiversity.

“The Amazon are the lungs of the planet, and the consequences are dire for the planet,” French President Emmanuel Macron said in announcing the aid fund earlier this week. The assistance was not intended solely for Brazil, but for the nearly dozen countries that make up the Amazon region in South America, including French Guinea. Canada and Britain pledged an additional $11 million and $12 million in aid, respectively, during the G-7 summit.

Bolsonaro’s decision to spurn the aid money from France and other economic giants comes amid a public spat with Macron that resulted Monday in the French president openly wishing Brazil would soon have a new leader. Bolsonaro insisted that Macron had called him a liar and insulted him by questioning his handling of the crisis, and said that once Macron retracted some of those comments, “then we can speak,” according to the Associated Press.

Critics have accused Bolsonaro, a right-wing populist dubbed the “Trump of the tropics,” of facilitating the fires and of taking a lax approach to preventing mass deforestation of the rainforest, while also being too slow to respond to the fires. Macron last week threatened to upend a major trade deal between the European Union and the South American Mercosur bloc over the issue, claiming Bolsonaro was not living up to environmental commitments that had been made under the deal.

Brazil’s Ambassador to France Luís Fernando Serra said on French TV Tuesday that his country is rejecting the aid because the decision was taken without involving his country and the “language is ambiguous.”

“We refuse because we see interference,” he said, calling the aid “help we didn’t ask for.”

Bolsonaro’s chief of staff went further, taking personal shots at Macron and suggesting that the aid may be better spent reforesting his own backyard. And he knocked the massive blaze earlier this year at Paris’ historic Notre Dame cathedral, noting that “Macron cannot even avoid a predictable fire in a church that is part of the world’s heritage, and he wants to give us lessons for our country?”