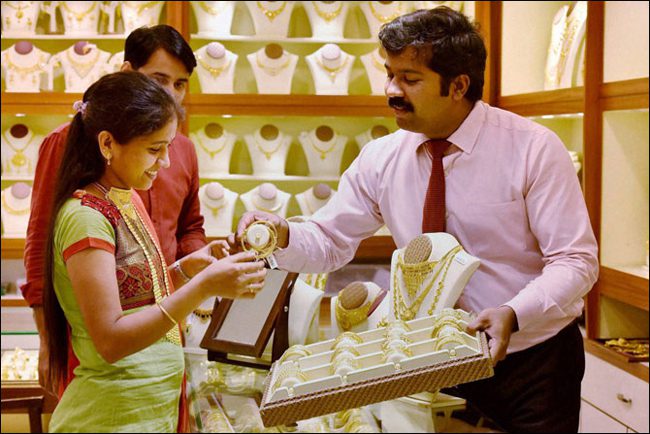 Gold prices in India edged lower following a slight strengthening of the rupee even as the yellow metal remained steady in global markets. On MCX, October gold futures were down 0.21% to ₹37,925. Silver followed a similar trend. September silver contracts on MCX were down 0.70% to ₹43,648. A weakening rupee along with a global rally in gold prices lifted domestic gold prices to record highs. The government in this year’s budget had increased the import duty on gold to 12.5% from 10%, increasing the landed cost of gold.

On Tuesday, gold prices in Delhi spot market rose to record highs of ₹38,770 as the rupee hit a fresh six-month low while on MCX, gold futures contracts hit a new high of ₹38,666 last week.

The rupee today strengthened to 71.51 a US dollar, as compared to Tuesday’s six-month closing low of 71.71. High gold prices have however hit gold demand in India with July imports falling significantly from year-ago levels. Also, floods in key gold-buying states like Kerala and Karnataka have also impacted domestic gold sales. Jewellers have also reported an increase in supply of old gold jewellery.

Some analysts say that gold and silver could come under some profit-taking in the near term but a sharp decline is unlikely. “Silver along with gold may remain under pressure in the near term as halt in rally may pave way for profit taking however a sharp decline is unlikely,” Kotak Securities said in a 20 August report. “While tensions have eased to some extent, market confidence remains low that a deal may take place soon. Also US-China tensions are not restricted to trade but involve currency manipulation charges and Hong Kong protests as well,” the brokerage added.

Also, on gold investors radar is the US central bank’s Jackson Hole seminar later this week. They would also be watching this weekend’s G7 summit on what additional steps policymakers may take to boost economic growth. Traders mostly expect that US Federal Reserve could go for another 25 basis-point cut in US interest rates in September. Lower interest rates boost the appeal of non-interest yielding assets like gold.

Global equity markets have recovered this week after on expectations that major economies like China and Germany would announce stimulus to boost growth.

Investors continued to pile into gold ETFs despite talk of stimulus measures in some major economies. SPDR Gold Trust, the world’s largest gold-backed exchange-traded fund, said its holdings rose 0.21% to 845.17 tonnes on Tuesday.

The uncertainty over US-China trade deal continued to support gold prices. US President Donald Trump on Tuesday said he had to confront China over trade even if it caused short-term harm to the US economy because Beijing had been cheating Washington for decades.