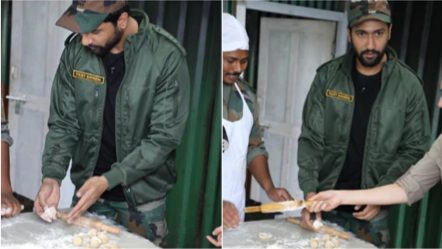 Actor Vicky Kaushal, who is spending time with the Indian army at the Indo-China border area of Tawang, Arunachal Pradesh, has turned chef for the troops. The Uri: The Surgical Strike actor, who is all set to don the military uniform for the second time for a film, shared a series of pictures on Instagram making rotis for the first time in his life. “The first-ever roti I made… glad it was for the army,” he wrote.

The first ever roti I made… glad it was for the army.

Elated to be getting an opportunity to spend a few days with our Indian Army posted at 14,000ft altitude at the Indo-China border of Tawang, Arunachal Pradesh. @ndtv #JaiJawan

In the pictures, an excited Vicky, donning a green jacket and camo cap, is seen taking cooking lessons from the chef of the Army mess and learning the art of making a roti. Earlier on Wednesday, the Manmarziyan actor gave a glimpse of his visit by sharing a picture with the Indian Army personnel on his Instagram.

“Elated to be getting an opportunity to spend a few days with our Indian Army posted at 14,000ft altitude at the Indo-China border of Tawang, Arunachal Pradesh,” he captioned the picture.

I feel honoured, emotional and proud of getting a chance to unfold the journey of this fearless patriot, the swashbuckling general, the first Field Marshal of India- SAM MANEKSHAW. Remembering him on his death anniversary today and embracing the new beginnings with @meghnagulzar and #RonnieScrewvala. @rsvpmovies

Meanwhile, on the work front, Vicky will be seen next in films like period drama Takht, Bhoot Part One – The Haunted Ship, and untitled film where he will be seen as Field Marshal Sam Manekshaw, helmed by Meghna Gulzar.