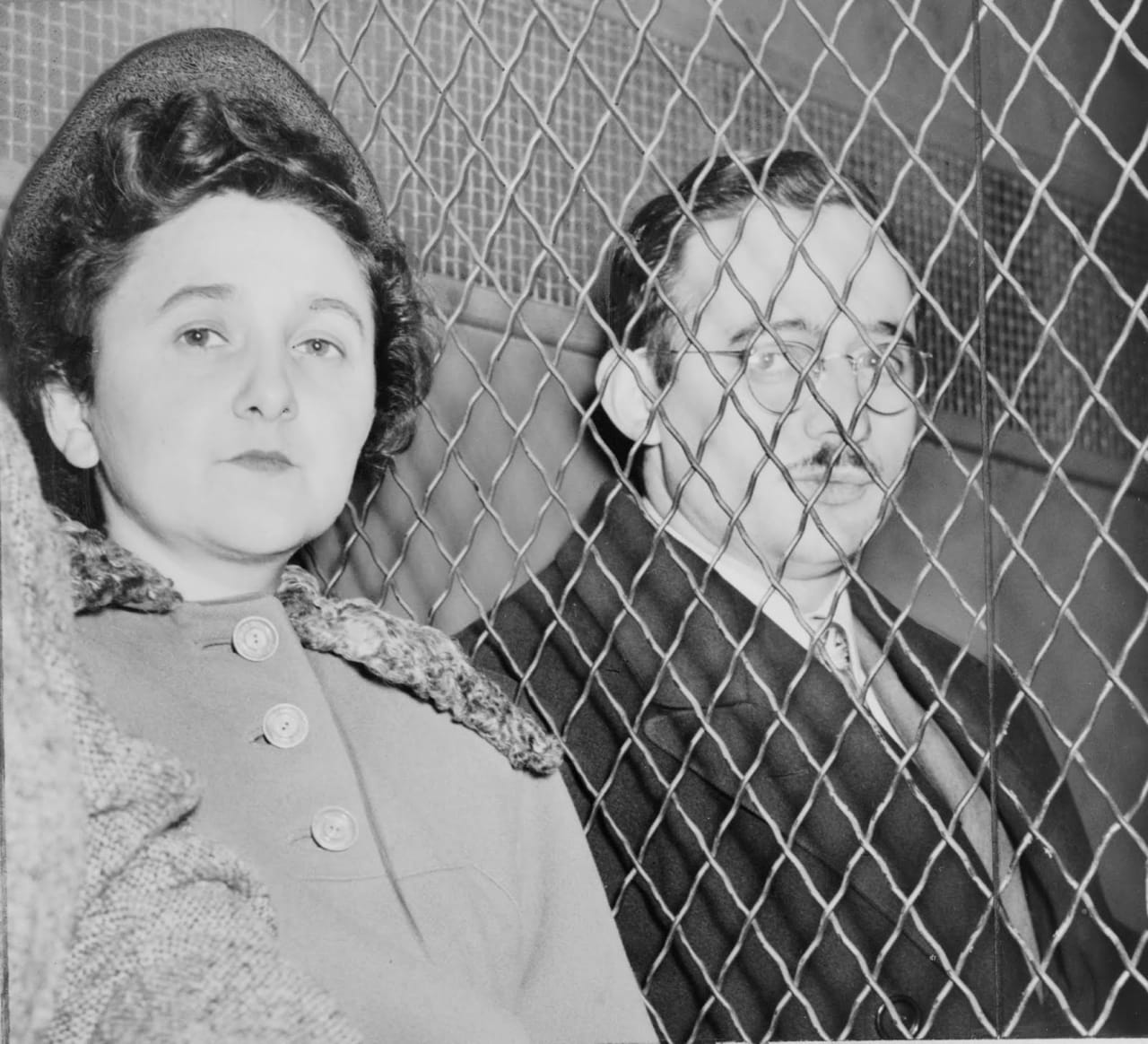 Summary
I Ethel and Julius Rosenberg (the Rosenberg couple) were sentenced to death for leaking nuclear secrets to USSR during second world war.
II Louis Nizer (February 6, 1902 – November 10, 1994) was a leading trial lawyer of America. He has written interesting books (My life in court, The Jury Returns, Reflections without mirrors, Catspaw etc.) about the cases conducted by him. He was not the advocate in the Rosenberg case but he researched about the same and wrote the book ‘The Implosion Conspiracy’. This article is about the case and the book.
II.I This post is part of the series ‘IT LIES IN THE HEART’. For other posts in the series, please see at the end of the article before the End Notes.

Ethel and Julius Rosenberg (the Rosenberg couple) were sentenced to death for leaking nuclear secrets to USSR during second world war.

Louis Nizer (February 6, 1902 – November 10, 1994) was a leading trial lawyer of America.   He has written interesting books (My life in court, The Jury Returns, Reflections without mirrors, Catspaw etc.) about the cases conducted by him. He was not the advocate in the Rosenberg case but he researched about the same and wrote the book ‘The Implosion Conspiracy’.  This article is about the case and the book.

This post is part of the series ‘IT LIES IN THE HEART’. For other posts in the series, please see at the end of the article before the End Notes.

Today, with the fall of communist Soviet Union, it seems inconceivable, but the events described below did happen.   It was not long ago—sometimes in the middle of the twentieth century.

The Rosenberg trial has all the masala of a Hindi film: love, hatred, betrayal, and drama; except the end. Their trial has been immortalised by Louis Nizer,  in the book ‘The Implosion Conspiracy’.

Ethel and Sgt. David Greenglass (David) were siblings. Ethel was  married to Julius Rosenberg (the Rosenberg couple) an Electrical Engineer and a member of the communist party.  During the Second World War, scientists from all over the world, except Russia, had gathered at Los Alamos to develop the Atom bomb. This was the defence adopted in the offensive form.  Had Hitler made the Atom bomb first, he would have been invincible. David was assigned to the atomic bomb project at Los Alamos (see End Note-1).  He gave some data regarding nuclear weapons to the Rosenberg couple. This was passed on to the Russians.

Klaus Fuchs was a leading Physicist at that time. He had come to Los Alamos1 from England. After the war, a file was discovered in Germany listing the names of communist spies. Klaus Fuchs was one of them. He was arrested. He confessed. His confession exposed other spies and theirs in turn to David and the Rosenberg couple.

The Rosenberg trial began on March 3, 1951. David Greenglass confessed the crime. He was given 15 years of imprisonment, the other conspirators who stood trial were given 30 years each. But the Rosenberg couple were sentenced to death.

David Greenglass was the chief witness for the prosecution. Not only he, but his wife Ruth and her sister gave evidence. They did not give evidence reluctantly but glorified in doing so. Many felt that they betrayed their own family. A brother destroyed his own sister. The entire trial was embroiled with emotional conflict. Was David subject of scorn or of pity? Was it betrayal on David’s part, or was it unfair use of him by the Rosenberg couple?

The defence had a problem. It’s a perpetual dilemma for criminal trial court lawyers: to remain silent and forfeit the chance of denying the accusation or to testify and risk cross-examination. The Rosenberg couple chose to testify. But the question remained, what position should they take, in case they were cross-examined about being communist.  One must not forget it was at a time when even the word `communist’ was taboo in the US.

But the lawyers did not take that decision: Julius Rosenberg took the decision. He was certain that they should claim the privilege.

The incident also raises a troubling question. Should a client be permitted to make strategic decisions? It was this decision that did more harm to Rosenbergs than any other. They became cruel victims of the McCarthy era (End Note-2).

The trial court sentenced Rosenberg couple to death on April 5, 1951. Thereafter on twenty-three different occasions applications for relief by way of appeal, review, Habeas Corpus, were filed before different courts. All were ultimately dismissed.

The 21st application, the sixth before the Supreme Court of United States was dismissed unanimously on 15.6.1953, the last day of the term. It was then, with all hopes lost and two days for the execution that the most dramatic event in the Rosenberg case happened. It also brought in light, the US Supreme Court’s most embarrassing public conflicts in light.

On 17th June 1953, Justice Douglas was packing his books and briefs for the summer vacation. Two lawyers, who were never engaged by the Rosenberg couple and who had never met them, went to his residence. They sought a stay of the execution on a new point.

The Rosenberg couple were charged with a conspiracy starting from 1944 upto 1950. At the time the conspiracy started, the law provided for the death penalty. In 1946 while the alleged conspiracy was still under way, the law was amended so as to make the death penalty applicable, only in case the jury recommended it. In the Rosenberg case, the Jury had made no such recommendation. The trial court had proceeded on the ground that only the original Act was applicable.

The question was analogous to the case in which while a thief was entering a house for theft, the punishment for theft is reduced; then which penalty then which should be applied:  the heavier or the lighter one?

Justice Douglas had vacillated with the Rosenberg’s case—for months, he had cast votes against them in the conference.  But then, as the execution date approached, he heard their arguments and stayed their death sentence on June 17, 1953. Thereafter without informing anyone got into his car and headed West: no one knew, where he went; he could not be contacted.

Justice Douglas’s behaviour also outraged many.  One of the telegrams mentioned by Justice Douglas in ‘The Autobiography of William O. Douglas: The Court years, 1939-1975’ (see End Note-3), summed up their feelings.  The telegram stated that:

‘if you grant the Rosenbergs a stay, there will be a lynching party waiting for you here’.

After stay of the execution, there were protests.  US administration urged the Chief Justice Fred Vinson to call special session during summer vacation.  After deliberating for some time, the US Supreme Court agreed to hear oral arguments on the next day on the point that had persuaded Justice Douglas to issue stay order.

This has never happened before nor has happened since then. Justice Douglas could not be contacted.  But when he heard on radio that Chief Justice Vinson had called the court into session he hurried back to Washington.

The court vacated the stay order on June 19, 1953 by majority of 6:3 in Rosenberg vs US 346 US 271.  Justice Douglas and two other dissented. The mercy petition of the Rosenberg couple was dismissed on the same evening.  They were allowed to spend the afternoon together, separated by wire mesh.  Ethel wrote a final letter to their children,

‘We wish, we might have had the tremendous joy and gratification of living our lives with you.  Your Daddy, who is with me in the last momentous hour, sends his heart and all the love that is in it for his dearest boys.’

They were executed the same night.

In the last 40 years gone by, it is often debated, whether the Rosenberg couple was guilty? This is a wrong question to ask. Probably there was sufficient evidence before the jury to hold them guilty. The right question is, was their punishment proper.

Klaus Fuchs a leading physicist had confessed that it was he who had given away the secrets, which were passed on to the Russians. It could not be said with certainty that it was the Rosenberg couple, who helped the Russians. And then, there were others, who, if not more, were equally guilty. If the others had not been given the death penalty then why should the Rosenberg couple?

The death penalty was not appropriate and it shocked many. The world over ‘Save Rosenberg Committees’ were formed. There were demonstrations and         appeals. Even Albert Einstein and the Pope had urged for clemency.  Yet, the Rosenberg couple were executed. What was the real reason for the execution? Was it fear or revulsion or frenzy against Communism or were they scapegoats for a show-trial to explain away the loss of America’s atomic bomb secrets?  May be, all of these. Before I end, a few words about Emanuel Bloch, their lawyer. He died soon thereafter. The Rosenberg case killed him as well.  Louis Nizer has dedicated the book ‘The Implosion Conspiracy’ to ‘TRIAL LAWYERS, the civilised warriors for justice’. He says,

‘Bloch is the hero of the book. Because his dedication and emotional involvement in the case is a shining example of the lawyer in his noblest role. He became an Advocate in the classic sense, whose hands were charged with electricity and his face ablaze with concern for his quivering client.’

Strange, one always thought lawyers should not be emotionally involved with their cases.

The book ‘The Implosion Conspiracy’ is interesting and gripping. It is worth every penny that it costs. The other books by Lousi Nizer are equally good and worth reading.

End Note-1: Los Alamos is a city of Los Alamos county, north central New Mexico, U.S., on the Pajarito Plateau (altitude: 2,225 m) of the Jemez Mountains. In 1942 it was chosen by the US government because of its comparative isolation and natural facilities as the location for the Atomic Research Laboratory then known as the Manhattan Project or Project Y, which developed the first nuclear-fission or A-bomb. After World War II, the Los Alamos Scientific Laboratory later called Los Alamos National Laboratory developed the first thermonuclear-fusion H-bomb.

End Note-2: Joseph Raymond McCarthy was a U.S. Senator. He dominated the early 1950s by his sensational but unproven charges of Communist subversion in high government circles.  In a rare move,  his Senate colleagues officially censured him for unbecoming conduct on Dec. 2, 1954. Thus ended the era of McCarthyism.

End Note-3: End Note-3: Autobiographies or any biography always teach you some thing so does ‘The Autobiography of William O. Douglas: The Court years, 1939-1975’. It gives insight into liberal Justice Douglas. An if one is interested in comparative constitutional history of Us and India then Tagore law Lectures delivered by Justice Douglas in 1955 ‘From Marshall to Mukherjea: Studies In American And Indian Constitutional law is worth reading.

Mr Yatinder Singh Retired Chief Justice Chhattisgarh High Court, Senior Advocate, Supreme Court India has written this article. The owner of the content of the article is Krishna Virendra Trust and the copyright, and all other rights are vested with trust itself. The article has first published on the trust’s site and available at https://kvtrust.blogspot.com/2020/05/the-rosenberg-saga.html#more