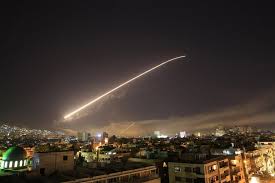 Israel| Syrian army commander has reported about Airstrikes on the outskirts of Syria’s Aleppo which has hit several military depots in Safira.

This comes days after Israeli military helicopters reportedly carried out a missile strike on southern parts of Syria.

“At 22:32 on May 4, enemy aircraft appeared on our air defense monitors. They were moving from the northeastern side of Itria. Several military depots in the area of Safira were attacked. our air defense systems repelled enemy missiles. the losses resulting from the attack are being specified,” the command was quoted as saying.

The Israel Defense Forces (IDF) did not comment on the incident.