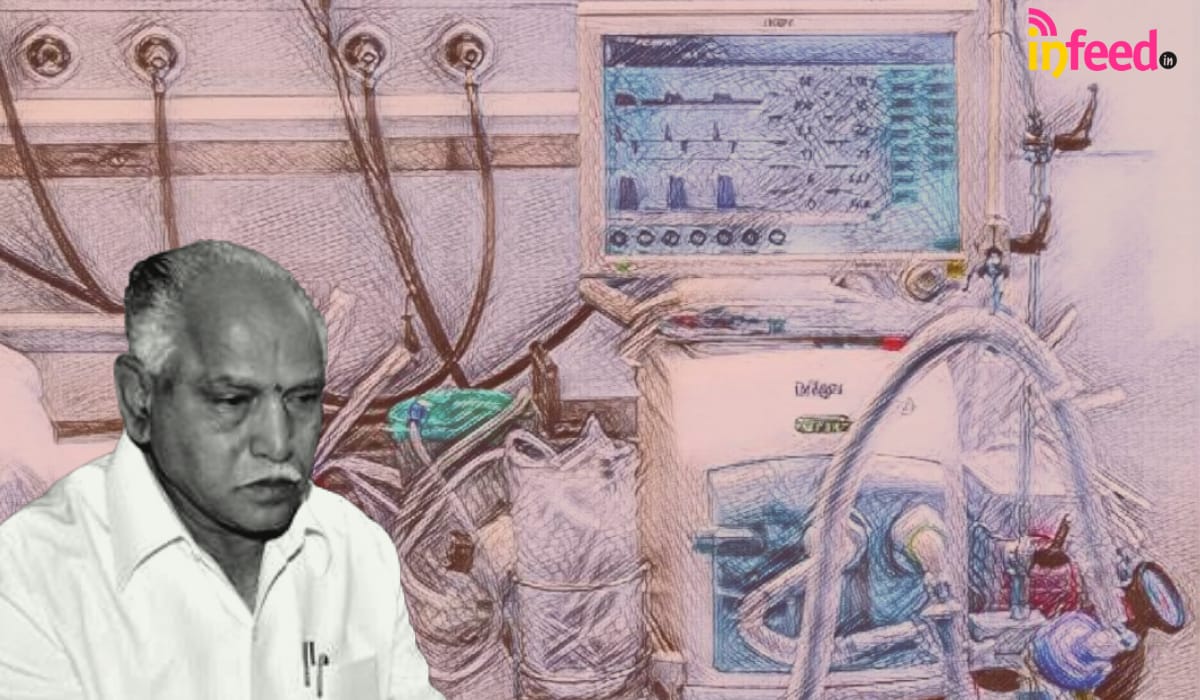 Amid the ongoing COVID-19 pandemic in the country, the BJP government in various states are not restricting themselves from using the opportunity for corruption. After MP’s floor scam and Gujarat’s ventilator scam, now the Karnataka government has joined the list. The state government has come under the scanner for shady procurement deals during the pandemic.

The government came under scanner after the revelation of the Karnataka State Drugs, Logisttics and Warehousing Society has allegedly bout PPE kits and used ventilators from a blacklisted company and other medical equipments at a higher price than that of the market value during the pandemic.

Deepak N, a whistle blower has complained about the irregularities and suspicion of corruption in the aforesaid procurement contracts to the PAC of Karnataka Legislature.

Deepak was part of the team that approached the Lokayukta and the Supreme Court to get the multi-crore Bellary mining scam investigated. Out of the seven contracts that he has raised questions about, at least four of them appear to be of serious nature and are backed by documents and communication of the KSDLWS.

The society, which is procuring PPE suits for government hospitals, gave nine purchase orders in March 2020. According to one such purchase orders given to the Amaravati-based ‘Plasti Surge Industries’ for 1.5 lakh PPE kits on March 9, 2020, PPEs were being procured at ₹330.40 per unit while the same company received a second purchase order for one lakh kits on March 14, 2020, where it was being paid ₹725 per PPE suit.

The complainant, Deepak, has raised questions as to how the price of PPE increased by more than two folds in just five days. Besides the increase in cost, the quality of the PPE suits were deemed substandard by various hospitals and the society had to write to the company to take back the unused PPE suits.

Also, the government has procured intravenous fluid bottles worth several crores from Gujarat based Aculife healthcare, which has been blacklisted in various states including Gujarat, Rajasthan and Odisha. A notice has also been served by the society to the company in February 2020 ,after the medicine provided by the company was found substandard on two occasions last year.

Also, no tender or quotation was asked for the procurement which further raises suspicion. Although, it is an emergency procurement, but the short term quotation should have been called off from the players who have participated in earlier tenders.

Also, a Delhi based firm, RK Medical solution has supplied 15 used ventilators on the cost of new ones. The ventilators were procured for a cost of Rs. 3.88 crore and were found to be manufactured in 2007 and some of them have been used for over 46,583 hours. While the ventilators were delivered on April 14, 2020, the society cancelled the order much later, on April 28.

“As per the work order the technical specifications do not comply fully compared to the data sheet. Many essential modes/options are not available, it cannot ventilate at neonatal mode/paediatric mode which is an essential mode for different COVID-19 patients as per anaesthesia specialist opinion. The ventilator does not comply with the supply order, you are directed to take back the supplied ventilator at your own cost and order stands cancelled,” stated a letter from Manjushree, additional director, KSDLWS.

“It is difficult to believe that a company delivered ventilators which are in almost junk state and it was with the KSDLWS for two weeks. We suspect there was an attempt to cover up but when few honest officers put this on record, they had no option but to cancel the order. Time is essential during COVID-19, and crucial time was lost because of this irregularity in procurement and cancellation,” argues Deepak.

In October 2019, the KSDLWS, through a tender, gave an order to SM Pharmaceuticals for supplying 47,000 sanitiser bottles of 500 ML at ₹97.44 per bottle over a period of 15 months. But the company, anticipating a spike in demand for sanitisers, allegedly refused to supply anymore in February after having supplied only half the quantity as ordered.

But this didn’t force the KSDLWS to take strict action against the company for violating the tender. Instead, the society entered into another procurement contract with this company at a higher cost where the same 500 ML sanitiser bottles were allegedly procured at ₹250.

“We suspect blatant corruption in this. In February, when the pandemic was spreading, the company saw a spike in demand and went back on its contract. But still they were not punished and instead given another contract,” says Deepak.

With several complaints pouring in, the PAC of the Karnataka assembly wanted to inspect some of these procured equipment being used in hospitals. Suspiciously, while the PAC inspection was scheduled on May 28, the Speaker’s office issued an order on May 27, barring the house committee from going on inspection, field visits and holding meetings.

The 20-member PAC comprises MLAs from all parties and is headed by senior Congress leader HK Patil. Speaking to The Federal, Patil said that the constitutional duty of the PAC was being obstructed by the Speaker and despite writing two letters, the Speaker had not bothered to respond.

“We have got a complaint about the procurement and some of them are backed by credible government documents. We have a duty to audit and check public spending. The allegations are serious; can you imagine the impact of two lakh substandard PPE kits? What will it mean for the health of corona warriors? Is this how we respect them? Corruption during a pandemic is anti-social and anti-national; we have the power to check and I wish the Speaker stands behind us,” said the head of the Committee.

BJP MLAs in the PAC were quick to defend the Speaker, saying that the advisory to not hold inspections or meetings was for all committees, and it was issued keeping in mind the increasing number of COVID-19 cases. They are disappointed with the Chairman talking about the issue in the media, and argued that the matter can be discussed when it comes before the PAC in due course.

Jawaid Akhtar, additional chief secretary, State Health and Family Welfare Department, said that most of the allegations were baseless and he did not have the specific details of the procurements under question. “As far as the used ventilators are concerned, as soon as it was known, we have cancelled it. Where is the question of irregularity? The rest, I don’t have the exact details,” said Jawaid Akhtar.

Karnataka’s health department has been praised for its management of the pandemic when compared to other states, but these allegations could dent its image if proven during the PAC audit.