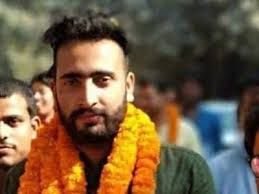 A student leader was shot dead on Holi day in Patna, Bihar’s capital. There has been an atmosphere of tension in the area since the incident in Patna’s Shastri Nagar area. The police is investigating the case by sending the dead body of the deceased student for postmortem.

It is being told that Kanhaiya Kaushik, a student of AN College in Patna, was associated with the ruling JDU here. On Tuesday evening, at around 8 o’clock he reached his companions Dev and Chandan. During this time, a student known to Kanhaiya came and met everyone. The said student started arguing with Kanhaiya over something, after which there was firing in the area.

A student’s condition is stable
Kanhaiya and Chandan were injured in the incident, after which their partner Dev took everyone to Paras Hospital. Kanhaiya was declared dead at Paras Hospital. Chandan has been admitted to the hospital after being shot in the arm. The condition of Chandan remains stable.

Suspicion of murder due to old enmity
After this murder, JDU’s MLC Ranveer Nandan also reached Paras Hospital. According to Ranveer Nandan, there may be old rivalry behind the crime. At the same time, police have registered their case and started their investigation.