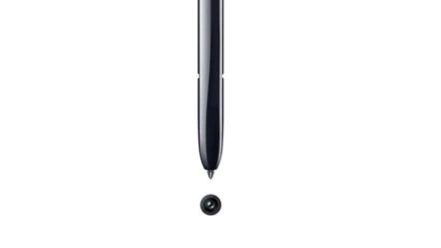 We’re just a few days away from the launch of Samsung Galaxy Note 10. Ahead of the official launch, Samsung’s new smartphone series has made numerous unofficial appearances on the web, revealing key features, specifications, and even design. As the August 8 launch date nears, more Samsung Galaxy Note 10 images have hit the web.

Reliable leakster Ice Universe on Wednesday tweeted two images of Samsung Galaxy Note 10+. The images reveal a familiar rectangular look of the phone with flatter corners. As expected, Samsung Galaxy Note 10’s cutout for the front camera is centrally positioned at the top of the display, unlike side aligned punch-hole cameras seen in the previous Samsung phones.

The cut-out is also quite smaller than the older notches. Interestingly enough, if you look closely at the images, you will notice reflection of a device with square camera module on the back – speculated to be Apple’s iPhone XR 2019 model.

Young leakster Ishan Agarwal has also posted a few renders of Samsung Galaxy Note 10+. According to the leakster, Samsung’s latest flagship phone will be offered in an Aura White colour option. The back panel retains the flat colour tone, contrary to the modern trend of gradient colours. The images also reveal vertically aligned triple rear cameras.

Samsung is expected to launch at least three models of Galaxy Note 10. Along with the base model, Samsung will launch a Galaxy Note 10+ and a 5G variant. The Pro model will come with a large 6.75-inch AMOLED QHD+ display with HDR 10+ support. The phones will be powered by Qualcomm’s latest Snapdragon 855+ processor. Samsung is also expected to launch an upgraded Exynos chip version in select markets. Other key features of Samsung Galaxy Note 10 series include 25W fast charging, up to 8GB of RAM, 4,500mAh battery, and USB Type-C support.