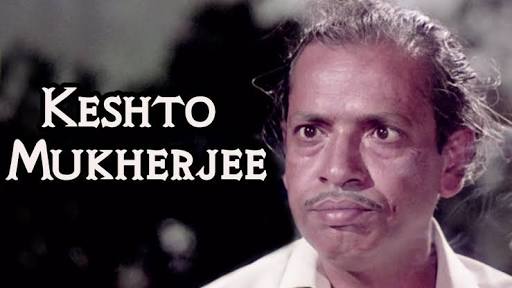 Remembering Keshto Mukherjee, one of Hindi cinema’s most competent comedians, on his 38th death anniversary today.
As soon as one utters “drunkard in films”, the immediate impression is of none other than Keshto Mukherjee. He specialized in comic drunkard roles in Hindi films. Though he was famous for his drunkard typecast role in Hindi films, in personal life he was a teetotaler.
Keshto Mukherjee was a discovery of the legendary filmmaker Ritwik Ghatak. His debut film was in 1952 in “Nagarik”, a Bengali movie which, neither Ritwik nor Keshto was destined to see, as the film was released after their deaths. Hrishikesh Mukherjee put him in his “Musafir”(1953). It was followed by some films where Keshto’s appearances could easily be obliterated. There was yet another Bengali film “Bari Theke Paliye” by Ritwik Ghatak, where Keshto was to play a street monkey-player. It was Asit Sen who ought to be credited for unearthing Keshto Mukherjee’s potentials of the patent drunkard acting in “Maa aur Mamta”(1970). Since then Keshto fell into a proto-typed trap of drunkard roles excepting a few.
In “Teesri Kasam” he acted with Raj Kapoor. In “Sadhu aur Saitan” he was one of the cronies of Kishor Kumar. A similar role was performed in “Padosan”. In Mehmood’s “Bombay to Goa” his role of a dozing passenger was simply superb.
In “Parichay”(74) he comes as the private tutor to a group of naughty children who terrifies him by setting a turtle with a lighted candle on its back. In “Zanjeer”, “Aap Ki Kasam” and “Sholay” Keshto Mukherjee’s performances have left long-lasting impressions. In ‘Gol Maal’(’79) Keshto’s brief role as a drunkard is so arresting. His encounter with Utpal Dutt in the police station is one of the most hilarious scenes recorded in Hindi films.
It will be a research work to trace if any lyricist has ever composed a lyric on the name of a comedian. It was Dharmendra who took initiative, and a song was picturized on Keshto (Keshto chala…). Though Keshto Mukherjee passed away in 1985, he will remain alive by his brilliant performances in films.