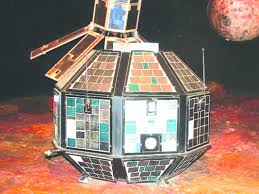 Today’s date is remembered as a stepping stone in the field of scientific advancement in the history of India. Forty-five years ago, on this day, India launched its first satellite in space, named Aryabhatta. In these forty five years Indian Space Science has travelled a journey starting from using other nation’s support to launch satellite to one of the world’s leading space organization.

On April 19, 1975, a group of 50 Indian scientists and technicians from ISRO gathered at the Soviet satellite launch complex in Kapustin Yar, near the Russian city of Volgograd to watch a rocket blast off into space.

The day is a big milestone in India’s space journey as after this launch, India has never looked back.  It gave a kick-start to an amazing space journey which has seen India send a satellite to Mars at the most economic price as compared to many other developed nations and create a world record for the most numbers of satellites launched by one rocket (104)

Very few people know that it was not the only name suggested to the Prime Minister Indira Gandhi. There were two other names as well – Jawahar, on the name of his father and India’s first PM Pt. Jawahar Lal Nehru and Maitri – to tribute India’s friendship with Soviet Union, as the satellite was launched from Soviet Union Station with the later’s support.  However, Mrs Gandhi chose the name Aryabhatta from the list.

The satellite, 360 kg in weight was a 26-sided polyhedron with each panel except the top and bottom, was covered by solar panels to supply power to the satellite. After reaching space, the satellite was completing one revolution around the planet in every 96.46 minutes

While many other space agencies were having a designated a different location for receiving and collating data, ISRO had converted a toilet into a data reception centre and it kept receiving data for the first six days, after which it failed due to some power failure system.

The satellite carried instruments to explore Earth’s ionosphere and measure neutrons and gamma rays from the Sun.  The data system included a tape recorder at 256 b/s with playback at 10 times that rate. The telemetry system operated at 137.44 MHz.

Despite not transmitting anything, the Aryabhatta continued to function in space and stayed in low earth orbit till 1992. On Feb 11, 1992, almost 17 years after it blasted off the earth’s surface, Aryabhata re-entered the Earth’s atmosphere. India’s first artificial satellite was no more.

Five years after the launch of the Aryabhatta, India’s firstindigenous satellite launch saw the Rohini RS-1 satellite blast off into space from the Satish Dhawan Space Centre at Sriharikota in the Andhra Pradesh. The Satellite Launch Vehicle 3 (SLV3) launch vehicle propelled the Rohini into low-earth orbit on 18 July, 1980.